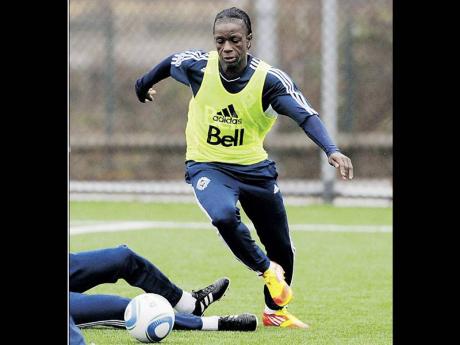 Teammates of Vancouver Whitecaps' Darren Mattocks are sure to welcome him back tomorrow, but the rookie will not be the only Jamaican on show in Major League Soccer (MLS) this weekend.

Mattocks, who missed six MLS games after burning his hand on March 18, said Vancouver is planning to have him in the squad at home against San Jose Earthquakes and he has the team's support.

"They really rally around me," said the 21-year-old forward, a former star at Jamaica's Bridgeport High and the University of Akron in the United States. " ... That's a real confidence booster."

Mattocks played only one minute in two games he was available, after being selected second overall in the 2012 MLS SuperDraft. San Jose is a stiff test. The Earthquakes lead the Western Conference (WC) of North America's premier football league, starting a team with strong Jamaican ties in midfielders Khari Stephenson and Simon Dawkins. They beat DC United 5-3 on Wednesday with England-born Dawkins collecting an assist.

Vancouver, third in the WC, scored only seven goals in eight games. The speedy Mattocks, who also missed Vancouver's winning start to the Canadian Championship on Wednesday, hopes to add offensive punch immediately.

"The expectation is very high for me," he said.

However, Jamaicans' MLS involvement this weekend begins today, when head coach Robin Fraser leads Chivas USA against Chicago Fire. Chivas lost 4-0 to Colorado Rapids last weekend to drop to eighth in the nine-team WC. National striker Omar Cummings notched an assist for Colorado, which snapped a three-game losing streak for the Rapids. But he was not satisfied.

"I think there's a lot of room for improvement for me personally and as a team," Cummings told MLS.com afterwards. "We still need to look within."

He was shut out Wednesday as Colorado's inconsistent season continued with a 2-1 loss at New England Revolution. The Rapids, now fifth in the WC, play FC Dallas on Sunday, May 6.

The absence of injured forward Thierry Henry may add pressure on Jamaica's Dane Richards to improve his offence for New York Red Bulls away against defending champion Los Angeles Galaxy tomorrow. New York, who beat New England 1-0 last weekend, sit third in the 10-team Eastern Conference (EC). However, the attacking Richards has no goals in MLS 2012, despite starting all eight games.

On May 9, the Red Bulls host Houston Dynamo and Jamaican duo of Jermaine Taylor and Je-Vaughn Watson. Taylor recorded his first assist of 2012 last weekend, but Houston lost 3-2 to DC United.

Tomorrow, Toronto FC, with seven straight losses, tied for worst start in MLS history, host DC United. Jamaica striker Ryan Johnson has one goal and one assist in MLS for TFC, last in the EC. He has identified the problem.

"You've just got to man up and be tough," Johnson told the club's website, "and I don't think we've been tough enough in some situations."