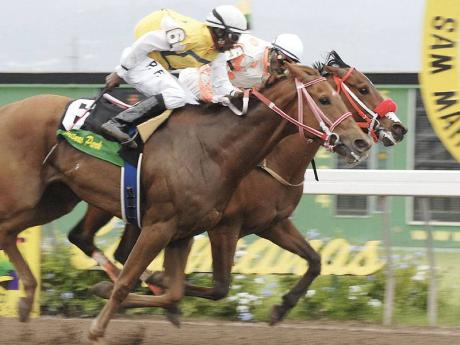 The even-money favourite SWEET TRAIL (outside) is about to tag 5-1 shot RED FLAG (Shane Ellis) by a short head in the highly competitive 10th race over 1300 metres for the Sam Mahfood Memorial Trophy at Caymanas Park last Saturday. - Colin Hamilton/Freelance Photographer

The Pick-9 had no takers on Oaks Day at Caymanas Park last Saturday, necessitating a carryover of $1.96 million tomorrow.

Additional sales should ensure a Pick-9 payout of over $2.5 million. Meanwhile, both Super-6s will start anew with the guaranteed minimum of $750,000 each.

The Pick-9 will embrace races two to 10, the first Super-6 from race one to six, the overlapping Super-6 from five to 10.

We look at the first Super-6 which commences at 12:30 p.m. with a restricted stakes over 1600 metres (a mile) to be contested by six starters, including the improving American 3-y-o colt ARGUMENT DONE, who is coming off a runaway win over 1100 metres on April 7.

Trained by Anthony Nunes, ARGUMENT DONE under champion jockey Dick Cardenas should start favourite in this small field and, although unproven at a mile, reports well trained and ready for all comers. Fellow Americans JAH LOVE and THERE GOES JUSTIN are ideally suited to a mile, and if ARGUMENT DONE fails to stay the distance, one of them should win.

With rich form present, DESIGN STAR will not have it all that easily, but based on his good third to MR. SKILL and subsequent winner WINCHESTER over the round-five course on a $550,000 tag recently, will not go down easily from the convenient mark of 53.0kg, thanks to apprentice Chalrick Budhai's 3.0kg claiming allowance.

Others such as MACHISMO (also dropped in class), MUMBAI MAESTRO, who won narrowly over the distance on March 24, CASHMERE GOLD (knocking at the door) and recent course winner RUN CHARM RUN should ensure a competitive race, but they all have DESIGN STAR to beat.

The progressive American filly LADY MACBETH has won two of her last three races for trainer Gary Subratie, and now stepping up to overnight company for the third race, ought to be followed with Paul 'Country' Francis aboard.

Running on strongly last time out, LADY MACBETH moved away to beat CANTARE and THERE GOES JUSTIN quite easily over 1820 metres in a good time. She will love the 1700 metres of this race and should prove too strong for DISTANT SUNSET and consistent RED FLAG in a field of seven.

CLASSY KELLY, who was a fast-finishing second to out-of-class SOCA PARTY over 1200 metres on April 21, should go one better over a longer distance (1500 metres) in the fourth race for $180,000 claimers. With Richard Nunan again in the saddle, the 6-y-o mare should relish the longer distance and gets the nod over SHEISMYHEART and FEELINGINTHESLIPS.

The fifth for the Master Blaster Trophy (non-winners of three other than) over the straight should resolve itself into a straight fight between the speedy SMOKIN MAN and HERMOSO AMIGO, who comes back quickly after disappointing as the big favourite behind SIR SOUTH over 1400 metres last Saturday.

Leading all-time jockey Winston Griffiths has stuck with the ride and the hint should be taken. Still, it promises to be real close between HERMOSO AMIGO and SMOKIN MAN. Then, close all bets with down-in-class FOREVER MINE under former champion jockey Omar Walker in the sixth for $250,000 claimers.