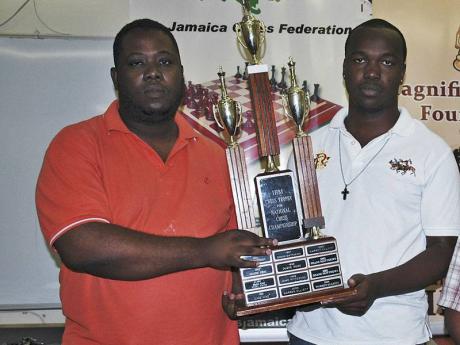 NM Andrew Mellace (left) and NM Damion Davy were locked at 6.5 points each finished atop the field of 24 players when the 44th National Championships ended at the Norman Manley Law School on Sunday. - Contributed

Defending champion, National Master Damion Davy, and NM Andrew Mellace were locked at 6.5 points each finished atop the field of 24 players when the 44th National Championships ended at the Norman Manley Law School on Sunday.

But it is not over.

For the National title, there can only be one champion. So NM Davy and NM Mellace must play off in six games to determine the sole winner. Dates for the play-off are yet to be announced.

President of the Jamaica Chess Federation (JCF) Ian Wilkinson, who also played in the tournament, described it as the most exciting nationals ever, with the strongest field of Jamaican players assembling to match wits.

It was the defeat of IM Pitterson by NM Mellace and the fall of FM Elliot to NM Davy in the penultimate round on Saturday that lead to chants of "Group! Group!" For many a year, the question of the chinks in what seemed the impermeable chess armour of Jamaica's two top-rated international players, who had become fairly secluded from consistent local competition, has been lurking.

NM Mellace said all his games were challenging and he prepared well for each opponent, but his favourite game was against IM Pitterson.

"He didn't get a chance in that game. I squeezed him from move one until the end," Mellace said.

Alvin Tracey, who is responsible for keeping and supporting intense Friday night chess training sessions of 'The Group' going strong consistently in Rollington Town, Kingston, got kudos from NM Mellace.

"A lot of hard work and dedication" is how NM Mellace described his trek to the top of the Nationals for 2012, alongside his training partner NM Davy.

Defending champion NM Davy, who suffered an early setback in round one with a loss to the young Shreyas Smith from Calabar High, clawed his way right back up to the top with consistent play after that wake-up loss. Commenting on his finish at the top after the prize giving on Sunday, NM Davy said: "It feels great, I did it last year and I did it again this year in an even stronger field."

When NM Davy and NM Mellace squared off in round 5 the result was a draw. When they meet for the deciding play-off the training partners know that there will only be one winner.

IM Pitterson was last defeated by a Jamaican in 2007 and last played a tournament just over a year ago. "I would have preferred to have been undefeated," IM Pitterson said. "But Mellace played well and deserved the victory," he added.

FM Elliot last played in a tournament of this nature in 2010. He said: "Actually, losing one game isn't too bad, but knowing your potential and history of being six-time champion it must be viewed as a below-par performance. Two years of inactivity is the clear cause, but this changes now."

FM Shane Matthews, leader in the early rounds, finished on six points and must be kicking himself as draws by NM Davy and NM Mellace in the final round meant that had he won, and not also drawn his final game against lower-rated CM Paul Brooks, he would have remained in contention for a record eighth hold on the coveted title with a triple tie for first place.

Gray wins for the Women

Krishna Gray, a 20-year-old UTech student, is the 2012 National Women's Champion. She finished the round-robin tournament with a field of eight women unbeaten with a score of six points from seven games made up of five wins and two draws.

This is Gray's fourth year playing in this tournament. Last year she placed third. The shadow of former women's champion Deborah Richard, though, who has left behind a 10-year unbeaten streak, begs the question about her absence this year and Gray's victory. "My inexperience caused me to lose the clearly won game in our previous encounter, but this time around I truly prepared to have a victory against WFM Deborah Richards," Gray said.

We can only speculate on what that outcome might have been as WFM Richards did not compete in this tourney and instead played in the National Open Champs, where she ended with a respectable 4.5 points.

Other finishers in the National Women's Championships were Ariel Barrett second, Melisha Smith third, and Hui Zhu fourth after the tiebreak, as all three ended on four points.

Young Alistair Walker led from the start to the finish at the top of the President's Invitational, ending with an unbeaten score of 7.5 points from eight games.

President Wilkinson at the prize- giving ceremony on Sunday hailed the young St Jago High School third-former as a name to watch for Jamaica's chess in the future. The president also awarded a special prize to Walker for his consistent immaculate dress for the three-weekend tourney.

May 19-20: The Robert Wheeler Chess Open, venue to be announced.