Men Who Cook heats up Mandeville 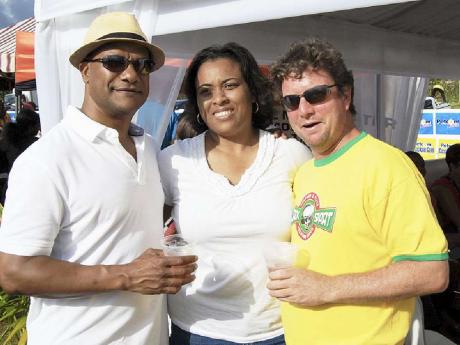 From left: Peter Bunting, minister of national security; Wendy Freckleton, president of the Manchester Chamber of Commerce; and Jason Henzelll of Jack Sprat Restaurant hang out at the Men Who Cook event in Manchester on Sunday. - Photo by Dave Lindo 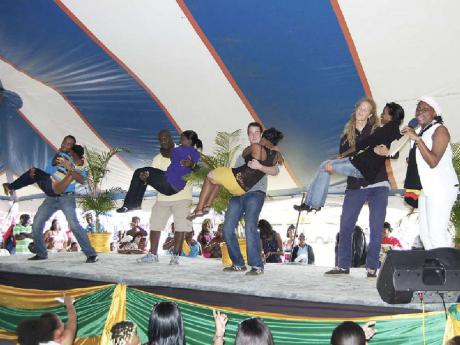 FORTY-EIGHT MEN displayed their culinary skills on Sunday as the Lions Club of Mandeville calendar event, 'Men Who Cook'. The event took centrestage at Brooks Park in Mandeville.

The 13th staging of the event had a record crowd in attendance, which included Mayor of Mandeville, Brenda Ramsay, and Damion Crawford, state minister in the Ministry of Tourism and Entertainment.

There were lots of scrumptious dishes to choose from, some served from top local restaurants in Mandeville including Mervs Restaurant, which served up a wicked stew peas and cornmeal; OMG Restaurant and Coffee Bar; Birds Restaurant; Bloomfield Great House; and Top Loaf Bakery, which had a mean Chinese roasted chicken. There was also a wide range of dishes made from chicken, pork, and seafood, along with regular Jamaican dishes such as ackee and saltfish and mackerel run-down.

Fay Heaven, president of the Mandeville Lions Club, was pleased with the success of Men Who Cook 2012.

"Last year, we had 1,800 paying people. This year, I am pretty sure that we have passed that. We got tremendous support from corporate Jamaica," Heaven said.

She added: "I would like to say a big thank you to every one for coming out. It rained today and the support we are seeing has filled my heart. It is much bigger than last year."

Hosted by the 'energy bunny', Jenny Jenny of Hitz 92FM, the crowd was kept well entertained throughout the event.

The children made good use of the fun rides and games on location including Ferris wheels, a train, a mechanical bull, a bounce-a-bout, and slides.

This year, Men Who Cook will support the Mandeville Regional Hospital, along with other charitable ventures being undertaken by the Lions Club of Mandeville.