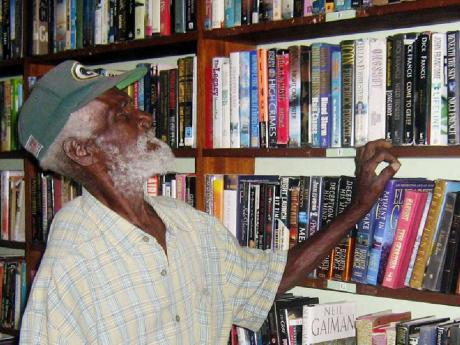 IMAGINE A man at 100 years old riding a bicycle around town, rowing his boat into the great domain of the ocean to catch fish for his dinner when he so desires, and reading for his pleasure or to broaden his knowledge.

You can stop imagining because this is real. Meet William James, who was born 100 years ago to farming parents Irene McIntosh and Godfrey James in Kingsvale, Haughton Court, in eastern Hanover. We met him recently at the launch of The Gleaner's archival exhibition at the Hanover Parish Library.

"My parents brought me to Lucea while I was still a little boy, and I went to elementary school at the Barracks, which is now Rusea's High School. I completed sixth standard, which was the highest level in those days."

He explained further: "I went to school with the Moo Young children and with the former custos, Percy Miller. From there, if your parents had money, you could go on further. I had to drop out, as my parents were poor farmers."

James began his career in fishing at age nine. The biggest fish he has ever caught a blue marlin weighing 750 pounds in 1954.

James, whose wife passed way more than 20 years ago at age 63, developed a passion for reading while at elementary school. This increased after he completed sixth standard. Reading is a passion that he shares with his nine children and his grandchildren.

"I love to read; it is my hobby. What I learn from reading, you don't get that from conversation - people talking with you and you talking with people. Reading gives me a lot of experience that I could not get anywhere else," related James.

The 100-year-old fisherman, who also functioned as a carpenter, mason, shoemaker, upholsterer, and mattress maker, has been a member of the library since 1979. He rides his trusty bicycle to the library at least twice a month to read from his favourite volumes.

Senior librarian at the Hanover Parish Library, Marvetta Stewart Richards, describes James as an avid reader who is used by the library service as one of its standard-bearers.

Said Stewart Richards: "He is an avid reader. He comes to the library two times per month to get his books. We use him as a marker for the people, telling them that reading is vital and that someone of his age is still reading. He also requested to be a part of the reading competition and he is now participating."

Stewart Richards, who is also the president of the Rotary Club of Lucea, said the club ensures that James is ok and recently donated a stove and tank of gas to assist him with his cooking.

James now lives alone - yes alone - at Haughton Court, just over a mile away from the Hanover Parish Library. He is the oldest member of the library.

"My favourite book to read is history, geography and autobiography. I love to read about personalities," said James, who is an enthusiastic fan of track and field's hottest property, Usain Bolt.

"He is so fast! I love to see him run! He makes the whole Jamaica proud, man! No man not as fast as him. But I would like to see someone who comes now and run and past him before I go," said James.

" I would prefer a Jamaican to do it, though - probably Asafa, at the Olympics. That would be something to watch."

He does not suffer from any debilitating illnesses - no hypertension or diabetes - and he sees clearly, even at night. Apart from reading, he likes to watch a good movie when he feels like it.

"I operate normally. I feel no pain at all. I see clearly. The last time I saw the doctor he says I was fit and all right."

He rides his bicycle to view land he owns at Green Island in the parish, 25 miles away, three or four times a week. He credits this as one of the factors for his longevity.

"If I put down my bicycle, you are going to have to ask where I am because I may not be around," said James. "My bicycle keeps me young. I have to go to Lucea every day, sometimes two to three times a day, and that is what helps me to keep so fit."