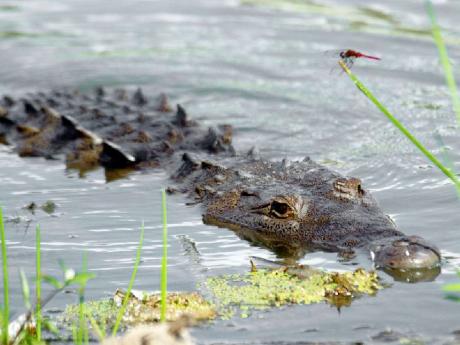 This crocodle swims near the surface in a gully that is approximately 40 metres from the entrance to the Sabina Basic School in Greater Portmore, St Catherine, yesterday. - Ricardo Makyn/Staff Photographer 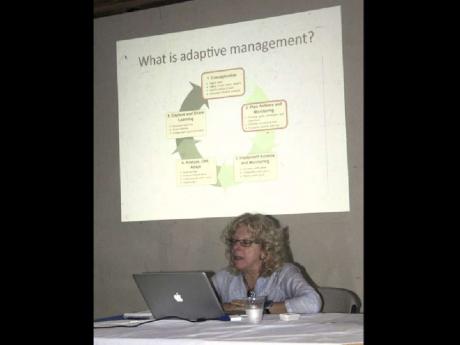 CONSERVATION ECOLOGIST Dr Ann Sutton is calling for a national campaign to protect crocodiles. She argues that their fearsome reputation as maneaters is undeserved and adds that the crocodile found in Jamaica, Crocodylus acutus, is a globally threatened species.

"Crocodiles suffer from a lot of misconceptions. People think that they are a threat to people; they are not. They prefer to eat fish; they prefer to stay out of the way of people," she told stakeholders at Wednesday's meeting to review the final draft of the management plan for the Portland Bight Protected Area.

While the crocodile is abundant in the Portland Bight Wetlands, the population is declining as a result of habitat destruction and illegal slaughtering, Sutton told her audience at the Hotel Versalles in May Pen, Clarendon.

She had this advice for Jamaican men: "Increasingly, the crocodile tail is considered an aphrodisiac. It is not. Get Viagra, not crocodile tail!"

In addition to the popularity of the tail, The Gleaner learnt that crocodile eggs are much in demand for making a punch for the same reason that crocodile tails have been exploited.

Sutton, who is a consultant to the Coastal Area Management (C-CAM) Foundation that has oversight responsibility for the Portland Bight Protected Area, noted that in the absence of a definitive baseline study, there is no accurate count of the local crocodile population.

She admitted: "We don't really know how many crocodiles we have, so when people say that there are too many, we can't really answer."

The scientist went on to suggest that a remote section of the Portland Bight wetland be zoned for crocodiles to give them a fair chance at survival. In making the case for the protection of these reptiles, which can play a critical role in maintaining balance in the ecosystem, she explained that by culling sick and diseased fish, crocodiles actually contribute to the promotion of healthy fish population.

Fish, crabs, birds, and snails are the primary items in a crocodile's diet and not humans, but it will eat dogs too, and in some cases, crocodiles are drawn to sewerage canals because of the presence of dog carcasses. Preferring to avoid contact with humans, the crocodile is most likely to attack when it feels threatened, or if its nest has been disturbed.

Sutton highlighted the importance of the crocodile in ecotourism, pointing out that in Black River, St Elizabeth, crocodiles are a main attraction during the boat tours. She said that the crocodile had greater economical value alive than dead, and it could live up to 70 years.

In fact, under the Wild Life Protection Act, injuring or killing a crocodile can attract a fine of $100,000, so if you see one, avoid it and call the National Environment and Planning Agency or C-CAM.