'Jamaica vs US rivalry good for athletics' 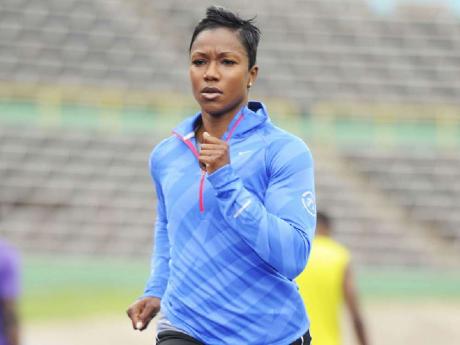 World Championships 100m champion and 200m silver medallist Carmelita Jeter is the latest to hail the value of the Jamaica vs USA sprinting rivalry, which she believes will continue to raise the appeal of the sport across the world.

"I definitely feel like the USA and Jamaica rivalry brings a competitive edge to the sport, and that it is extremely wonderful for the sport," Jeter told The Gleaner yesterday.

"Jamaica being a smaller country and the USA bigger, this certainly promotes the sport more," Jeter added. "Track and field has been down in some places where it is not as big, and us going head-to-head at meets like this shows people that it can be exciting and you can watch us even when it's not the Olympics."

At last year's meet, Jeter sped to a meet record 10.86 en route to a big win, but is she in that kind of condition already this time around?

"We'll probably find out tomorrow," Jeter laughed. "I've been training well, I opened up with a very good 200m and I had a lot of fun at the Penn Relays, so I'm not chasing times because you never know what the weather conditions will be like, but I am definitely going to go out there and execute and see what happens."

Jeter, who will be looking to claim her first Olympic medal at this year's games in London, says that she is not paying too much attention to the summer spectacle and is directing all her focus on first of all qualifying for the US team.

"At first, I have to make the (USA) team, that's what my first goal is. I can't think farther ahead than where I need to think at first, and the Olympic trials in Eugene, Oregon, is where my eyes are set at right now," she underlined. "I'm very focused, I'm not really trying to 'overthink' it at this time, I'm just looking to go out there and ensure that I make that team, it's very important."