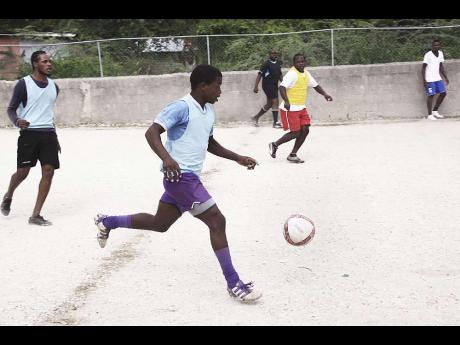 Danland's Marlon James, the most valuable player of the competition with five goals, dribbles the ball during a match in the Portmore Lane Covenant Community Church six-a-side football competition on the church grounds, Portmore Avenue, Portmore Gardens, last Saturday. - Photo by Anthony Minott 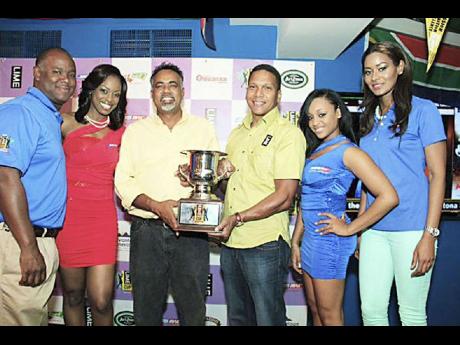 Prize money is not a factor as the competition is not formally sponsored, but at stake is the huge benefit of landing an automatic spot in the four-team play-off for two spots to next season's Red Stripe Premier League.

New Green will take a 1-0 lead into the final from Wednesday's first leg at Brooks Park, but as hosts and still the competition's most consistent team, Rivoli are still highly fancied.

This would be the fourth meeting between the two, and all three previous games have been won by 1-0 margins.

The South Central Confed Under-20 final between Rivoli and Meadows will precede the Super League final at 2 p.m.

The quarter-final stage of the Power Services-sponsored Manchester Division Two football competition will be played tomorrow. All four matches will be hosted at the Kirkvine playing field, utilising the advantage of being able to host two matches at the same time.

In the first set of games slated for 1 p.m., Alligator Pond will meet Cedar Grove, and Allied Youth tackle Grey Ground. The second set of games at 3 p.m. will feature Greenvale vs Old England, and Land Settlement vs Hasty Good.

In the preliminaries, Grey Ground and Land Settlement qualified from Zone D, and from Zone B came Alligator Pond and Old England.

Zone C qualifiers were Allied Youth Club and Hasty Good, while from Zone A teams are Cedar Grove and Greenvale.

With a one-point lead on Jamalco, victory would guarantee Four Paths the league title regardless of Jamalco's fortunes against New Bowens at Wembley. Jamalco can sneak through and claim the championship providing Four Paths draw or lose.

Four Paths may not have things their own way as Rock River could prove dangerous, especially as relegation hangs around their necks.

Gimme-Me-Bit, who have seemingly withdrawn without completing their fixtures, are almost sure to be relegated. Another team, Longwood, is poised for the drop, but they can pass on that noose to Rock River, providing they win against Woodhall at Turner's Oval.

Games on today at 3:30 pm: Four Paths vs Rock River, Jamalco vs New Bowens at Wembley, and Woodhall vs Longwood at Turner's Oval.

At the start of the season, Jamalco, New Bowens, Woodhall and Milk River were the ones bandied around as likely winners. The lead was inter-changed between Jamalco, the mid-season champions, and New Bowens, the beaten finalists, several times. However, both suffered unexpected losses to York Town, a team which will finish sixth overall.

Newcomers Jamaica National Building Society (JNBS) made a winning start in the Reggae Jammin 50-over cricket competition last Sunday, when they defeated Red Stripe by 24 runs at the Red Stripe Oval on Spanish Town Road.

Despite having some experienced players in their line-up, Red Stripe could only manage 99, with Allen leading the way with 49, against Roje Barrett, 6-30, and Dexter Barnaby, 2-11.

The other opening-round match between former champions LIME and Digicel, which should have been played at Kensington Park, had to be postponed. The competition has attracted 11 teams, including defending champions National Housing Trust, who will bow into action tomorrow.

The matches on for tomorrow's second round are BoJ vs NHT at Mona Bowl, Jamaica Broilers vs LIME in the feature at Spring Village, Red Stripe vs Sagicor at Red Stripe Oval, and Jamalco vs Digicel at Jamalco.

As a prelude to the Wray & Nephew White Overproof skittles competition which starts on May 20, the Jamaica Skittles Federation will stage a familiarisation tournament at Mystix, Hagley Park Road, tomorrow afternoon. The one-day tournament (nine-a-side) will be played on three tables and all 12 teams in local skittles will participate.

Meanwhile, venue problems affecting two of the top teams - Eastern All-Stars and defending champions Eagles - have been resolved. Eagles are now temporarily housed at premises on Red Hills Road, while Eastern have moved to another location on Windward Road.

The Wray & Nephew competition will be launched on Wednesday, May 16 at Wray & Nephew on Spanish Town Road, with play commencing on Sunday, May 20.

As many as 20 teams will compete - 10 in Division One and the same number in Division Two. There are four newcomers in Churches, Jamaica Observer, Tropical Battery and Carib Cement, all playing in Division Two.

Coach of the newly crowned champions, Rayon Gordon, said he knew his team would have pulled off the victory as they are "the better team".

"First of all, we have to give God thanks for the victory, and I thank the players for playing out the whole season, because it was a tough task as we played in the league and in knockout competitions," said Gordon.

"We know we are the better team. Rodwood beat us (5-3) on a relaxed day (in the mid-season final) when we thought no team could beat us. Now we know that a team could beat us, we regrouped and the players followed my instructions and we were victorious."

Fraszier's Whip, who advanced from the preliminaries as the top team on points, have now qualified for next season's South Central Confederation Super League.

Defending champions Caribbean Classic will put their title on the line as they play Island Special Constabulary Force (ISCF) in one of four quarter-final games in the Impulse-sponsored Portmore/St Catherine Domino League at Caymanas Track Limited tomorrow. All matches begin at 11 a.m.

It has been all but smooth sailing for Classic this season, as they have been beaten four times, including a 300-297 loss to arch-rivals Fort International. Classic have won eight titles in Portmore domino competitions. Their mettle will again be tested as they seek an unprecedented ninth title. Their opponents, ISCF, had beaten them earlier in the season and Classic will surely want to seek revenge.

Top-seeded Fort are favourites to cop the crown, as their only loss was in the boardroom. They had used an ineligible player in a match against ISCF, which they won. Fort play Eradication, a team that almost finished out of the top eight.

Danland FC, based in Portmore Lane, lifted their first six-a-side football title as they defeated Black Spades 1-0 in the final of the Portmore Lane Convenant Community Church one-day tournament in Portmore, last Saturday. Marlon James struck the winning goal, his fifth of the day, and he ended the competition as the leading goalscorer, as well as MVP.

In semi-final action, Danland knocked out two-time defending champions Portmore Youths 1-0 on a goal by James, while Black Spades stopped Family FC 2-0, owing to a double strike by Trevor Parchment.

The competition is aimed at providing a healthy recreational alternative, particularly for the young men in the communities of Portmore Gardens, Newland, and Waterford. The players were given Gatorade courtesy of Pepsi Jamaica, while spectators were given spot prizes. It was the fourth staging of the event and the tournament attracted eight teams.

Westchester copped their second title of the season after turning back the challenge of Hellshire United 1-0 in the final of the LIME Portmore Division Two football league at Ferdie Neita Park in Braeton last Sunday.

The club's top striker, Lusheng Davis, struck the all-important goal in the second half. Davis finished the season on nine goals. It was Westchester's second title of the season, and they have automatically advanced to the St Catherine FA Division One next season.

While it was pure joy for Westchester, after being out of competitive football for over a decade, it was a bitter day for Hellshire. They had high hopes for this season, especially after they copped the Colin Fagan knockout title for the first time, and they had forward Rohan Cato return to full fitness. They also had the services of Rohan Grant, back from a stint from Super League outfit August Town.