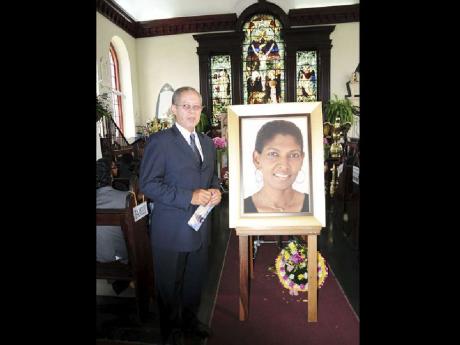 Former prime minister, Bruce Golding, stands beside a photograph of Pauline Reid during her thanksgiving service at the St James Parish Church in Montego Bay on April 28. - Photo by Sheena Gayle

Former prime minister, Bruce Golding, came to pay his final respect to the stellar businesswoman and philanthropist, who, up until her death, advocated for the continued development of the city of Montego Bay.

With an array of beautiful flowers and several portraits of Reid's smile adorning the St James Parish Church, there were few tears as the ceremony took a celebratory tone and highlighted the achievements and persona that characterised Ried.

According to Reverend Canon Justin Nemhard, Reid was not afraid to give service to the community and urged others to fill the gap in championing the cause of the less fortunate and continued development of the city.

At the time of her death, Reid was the second vice-president of the 79-year-old Montego Bay Chamber of Commerce. Last December, she launched her book, Montego Bay Jamaica: An Awe-Inspiring Photographic Journey.

Chamber president, Davon Crump, highlighted her indomitable spirit in ensuring that the community in which she lived and worked was given priority by the Government and other stake-holders.

Crump described Pauline as great and fearless. He said she had a positive impact on the Chamber and left a rich legacy for them to emulate.

"She served Montego Bay well, and even in her book, she left us with images of where the city has come from and where it is today that will serve as part of our literary history for future generations," Crump said.