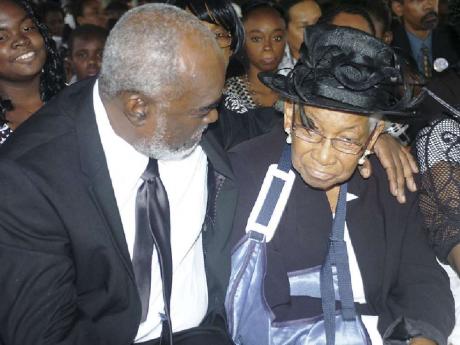 Richard Morais, teacher and Gleaner correspondent, consoles his mother-in-law, Gertrude Dennis, during the funeral service to celebrate the life of his wife, Paulett, at the Falmouth United Church in Trelawny last Saturday.- Photo by Mark Titus

Hundreds gathered at the Falmouth United Church in Trelawny to celebrate the life of the well-respected educator, Paulett 'Cluge' Morais, who was laid to rest last Saturday.

The outpouring of love from those in attendance was testimony of a woman who dedicated her life to family, community, and church. She was remembered as a singer, musician, motivator, servant of the people, with a never-say-never personality that had a positive impact on the lives of all those who came in contact with her.

The tributes were many and fitting, and had one common thread: the woman of God had been called to higher service.

A special tribute came from the Falmouth Infant School where she spent most of her teaching life, while the Early Childhood Commission and Jamaica Teacher's Association were also represented.

The service was a celebration of the life of a giant of a woman, who was of diminutive stature.

Attorney General and Member of Parliament for North Trelawny, Patrick Atkinson, and Mayor of Falmouth Garth Wilkinson headed the list of mourners and well-wishers who helped celebrate Morais' life during the four-hour-long service.

One of the most memorable moments was a rendition by the deceased's younger brother, Rohan Dennis, which coincided with her last request for her husband, Richard, to be called to assist her to 'Stand'.

Childhood friend Dorset Ainsworth reflected on their friendship from their first meeting at a school entry test up to the time of her death.

The 53-year-old educator who hailed from Duncans in Trelawny passed on April 15. She was described as "the backbone of any project" in which she was involved.

Morais is survived by husband, Richard; daughter, Richelle; mother, Gertrude, and a host of other relatives.