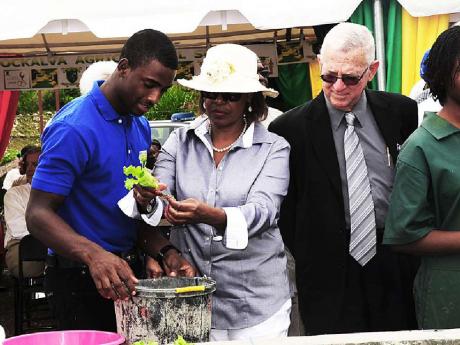 United States Ambassador to Jamaica Pamela Bridgewater (second left) cleans the roots of a pak choi plant with the assistance of Sheldon Poyser (left), agriculture teacher at Knockalva Agricultural School, before planting it in a bed of gravel as Education Minister Ronald Thwaites looks on. - Photo by Barrington Flemming

An aquaponics project, funded by the United States Agency for International Development, has been launched at the Belmont Academy. United States Ambassador Pamela Bridgewater visited the school last week to interact with the students involved in the farming technology, which was designed to yield more at a lower cost.

"We are not just donating. This is an investment because we know this is going to pay returns that are going to go for a long time," said Bridgewater.

Linda Pfeiffer, president and chief executive officer for INMED Partnership for Children and INMED Caribbean, explained that the programme is adaptive to climate change. The aquaponics feature - a combination of fish cultivation and hydroponic vegetable production - is a closed system that uses 85 to 90 per cent less water and up to 10 times more in yield in the same space.

She further explained that it is all organic since the nutrient-rich water from the fish is used to fertilise the vegetables. From there, it filters, cleans, and oxygenates the water, which is returned to the fish, making the process sustainable.

"I hope this will be replicated in other schools in my constituency and among the general community members because I see this as an income-generating activity which will greatly assist my farmers," said Member of Parliament for Eastern Westmoreland Luther Buchanan.

Minister of Education the Reverend Ronald Thwaites wants to see the project introduced in educational institutions.

"If we do a few in each educational region and show it to the other schools, I feel certain that in time, it will prove to be both an educational and economical success," he suggested.

"I'm hoping that with the limited cost and the great benefit we are hoping to have, stakeholders will sponsor aquaponics projects in many schools, which, of course, could be used to offset some of the expenses associated with the school-feeding programmes."

INMED has been operating in Jamaica since 2003, and while it did not originate the concept of aquaponics, the organisation has simplified it and made it more cost effective in Jamaica by using local materials. According to CEO Pfeiffer, it is now being replicated in South Africa and will be in Peru soon.