Baltimore - a multiplicity of cities 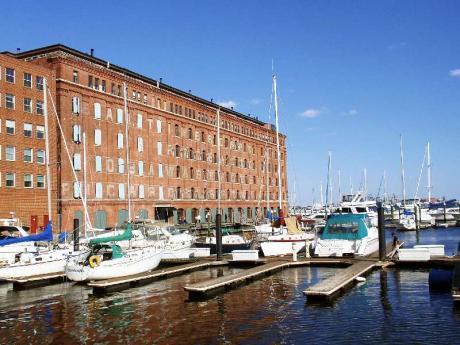 Baltimore is a multiplicity of cities with staggering, heartrending poverty, enthralling museums, world-class medical facilities and a tourist trade attracted not only by Baltimore's fascinating history, but also by its more recent inner harbour development.

I might never have known the extent of Baltimore's decrepitude had I not lived there as a child when Daddy was a graduate student at the John's Hopkins University. We'd lived on Garrison Boulevard, in a row house where the next-door neighbours were a well-off Jewish family, but our landlord wasn't so kosher and had rented the top floor to someone the FBI came around to investigate. We didn't know anything about him, but the boy who lived upstairs was my playmate; a nice kid whose mother once belted him across the front porch.

I wonder what's happened to Skippy? When we went to first grade, he didn't answer roll call. He'd always been called Skippy and didn't know his given name. Late at night, his mother let the garbage down in a bucket out the back window to the alley below. I didn't realise that at first. I just heard the knocking on my bedroom window and, terrified, I'd bury myself under every stuffed animal I owned so that when the bad man broke in to stab me, he'd stab the stuffed animals instead.

Once the
other kid on the block, Charles, punched me in the stomach in the back
alley so hard that when I ran home to tell mommy, I vomited first. Boy,
did she tell his mom off! I was luckier the time the bad boys in Druid
Hill Park nearby tried to catch me. They tied little children to trees
and tortured them, beat them at least. I almost got caught once, but I
ran like the wind, faster than I've ever run in my life and escaped. I
got to the corner drugstore and was safe there. Though, I remember
another time, going to the corner drug store to buy one of those rings
that was all the rage. You wore it on your finger and when you blew into
it, the ring whistled.

I had five cents and proudly put my nickel on
the counter, but when the clerk told me it was 25 cents, I ran home in
tears because I knew there was no way my parents could find another 20
cents for me to buy that ring. They'd given us big ceramic pigs - mine
was red and my sister's pink. They couldn't open, just had a slot to put
coins in. This was to teach us to save. But there were months my
parents had to get a nail file out and by digging around through the
slot and shaking the pig upside down vigorously, they'd be able to get
some coins out just to help pay the bills. They always paid us back, but
I knew an extra 20 cents for a ring was out of the question - plus the
humiliation of not having enough money - just had me sobbing my heart
out.

But Baltimore wasn't all bad. We got 35 cents a
week allowance and my older sister and I went without fail to the movies
every Saturday afternoon. For that, one could see a double feature, get
a bag of popcorn and a soft drink and still have something for the
Sunday collection at Star Methodist Church, a big grey cut-stone
building up the block. At Easter, mama made us new dresses out of
polished cotton, with wide skirts. I had a tussle with the little girl
sitting next to me in the church pew who kept trying to spread her skirt
out on both sides, covering my skirt in the process. The trials and
tribulations of being a child in Baltimore.

I was
coming up to seven when we left and had never been back. My husband
wanted to consult someone at an institute there recently, so we decided
to spend the weekend as tourists in Baltimore after more decades than
I'd care to admit.

We booked into the Inn at
Henderson's Wharf on Fell's Point by the harbour, but when I told the
African-American taxi driver that I wanted to see what the old
neighbourhood on Garrison Boulevard looked like now, he warned me to
stay in the car and not take any photographs because people would think I
was either from the FBI or the Police doing surveillance and they might
not take kindly to that. Plus, I shouldn't even think of going there at
night because he sure wouldn't. On that cheery note, we put the address
into the Garmin road navigator and set off in our rental car. All went
well as we headed north until we got to North Avenue and turned left.

That is when we encountered block after block, mile after mile of
boarded up, burnt out, dilapidated ruined row houses so dreadful, it
reminded me of what I'd seen of Detroit city, or San Bernardino, where
entire neighbourhoods were devastated by segregation, unemployment,
drugs and gang violence. I remembered that hauntingly sad song about
Baltimore sung by the Tamlins and wondered if this was what inspired it.
And on every corner there was an official sign stating that loitering
was not allowed, an offence, and under every sign there were groups of
young black youths hanging out, occasionally stumbling around. The
bleakness of so much loss brought home how America's cities have
suffered horribly in the economic outsourcing of labour in this
globalised world, and the importing of drugs for
distribution.

Oddly enough, when we turned the corner
finally onto Garrison Boulevard, it appeared that block was one that had
undergone a degree of gentrification. Where our row house stood,
greenery flourished on a vacant lot, substantial houses stood on
individual lots and my old church is now an Apostolic Church. But enough
about the downside of Baltimore. Next time, the reasons you'll want to
visit this south of the Mason-Dixon line
city.