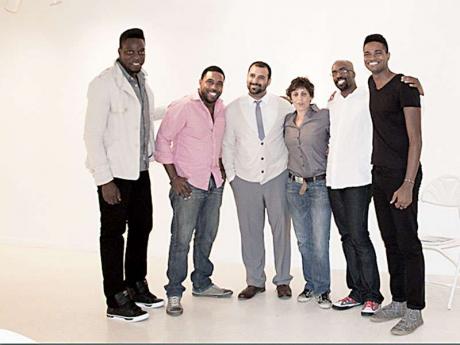 From left: Featured photographers Marvin Bartley, Marlon James, Alex Smailes, Abigail Hadeed, O'Neil Lawrence and Rodell Warner at the Pictures From Paradise artist talk, which took place a day after the launch, at the Medulla Gallery in Trinidad and Tobago on Friday, April 27. - Contributed

Nothing but spectacular! The launch of the book, Pictures From Paradise: A Survey of Contemporary Caribbean Photography, was greeted with a bevy of supporters from the art community at the Medulla Gallery on Fitt Street in Port-of-Spain, Trinidad, on Thursday, April 26. The event was incorporated into Trinidad and Tobago's (T&T) second annual Bocas Literary Festival, which ended last weekend.

The publication, which took a laborious eight months of production, is the first of it's kind in the Contemporary Art Series by T&T's Robert and Christopher Publishers. Co-editors for the publishing company, Melanie Archer and Mariel Brown beautifully captured the works of 18 photographers representing different parts of the Caribbean, namely Jamaica, Trinidad and Tobago, St Kitts and Nevis, Guyana, St Vincent and the Grenadines, Bermuda, and Barbados. Out of the 18 photographers, Jamaica had the highest representation with six artists.

So kudos to Reneé Cox,
O'Neil Lawrence, Ebony G. Patterson, Marvin Bartley, Marlon James, and
Radcliffe Roy for being a part of this project and for providing images
that helped to make an impressive publication. Other featured
photographers, who were in attendance, were Trinidadian natives Abigail
Hadeed and Rodell Warner, and Alex Smailes, a United Kingdom native of
Trinidadian parents.

The launch saw a total of six
photographers who managed to attend, out of which, three of our own were
represented. Bartley, James and Lawrence gladly accepted the accolades
on their other patrons' behalf, tirelessly beaming and signing their
signatures in the books that were on special price that evening and,
eventually, were sold out. While a continuous slideshow projection of
the artists' works were projected against a wall in the basement of the
gallery, Brown, who gave the opening speech, manned the sales booth, and
Archer was seen gleefully foraying and weaving her way through the
unrelenting crowd, while modestly accepting the congratulatory
praises.

"I was really delighted, happy and relieved
that the book launch was so well received," Brown expressed. She was
particularly pleased that the photographers were just as elated with the
publication.

With projects of this magnitude, Brown
explained, getting to happy was never easy. "Liaising with the 18
photographers and logistically getting everyone's work was a tremendous
challenge," the co-editor shared.

With the exception
of one artist, who declined being a part of the book, all the
photographers, from what Brown and Archer have gathered, have been very
receptive since the project's inception and even more so, now that the
book has been published with an attractive layout.

You
can thank Trinidadian graphic designer and contemporary artist, Richard
Mark Rawlins for that. He managed to complete the compilation of the
book in just one month. The main challenge was deciding the best image
for the cover. After much deliberation, the T&T trio (Brown,
Archer and Rawlins) narrowed down the five contenders to one, settling
for the obscurity and dynamism of Bermudan photographer, James Cooper's
Fish Line #2.

How artists were
chosen

Contrary to the book's title, the artists were
chosen simply because their body of works depicted just the opposite.
After viewing the Shot in Kingston: The Digital Scene
exhibition at T&T's Alice Yard in 2010, curated by Christopher
Cozier in the island, Archer and Brown realised that the works of the
Jamaican photographers, which also included, Bartley, Lawrence,
Patterson, and James took a zeitgeist approach that was visually
interesting and provocative. It suddenly dawned on the editors that
collating such works into one unit, would have been ideal, and so, the
plans were made.

The editors believe that the works of
the photographers are an honest and clear adaptation of themselves and
the world they live in. Photographers Bartley and Warner have, notably
expressed, that the publication has unified the Anglophone Caribbean and
is the perfect tool to evenly showcase the works that photographers are
producing across the region. Essayist for the publication and one of
the featured photographers, O'Neil Lawrence, further posited that
contemporary photographers "are responding in new ways to the
representational history and realities of the Caribbean". So don't
expect the less complex and picturesque depiction of landscapes, sandy
beaches or jovial natives.

Based on the various
imageries, the editors have grouped the works and, essentially, the
book, into three categories: The Tableau Vivant, The Documentary, and
The Portrait.

The launch was followed by an artist
talk the following day, where the six artists in attendance presented
their previous, present, and future works on a slideshow projection,
while articulating in more detail their cognitive and technical
processes.

Archer and Brown will be transitioning
their launch of Pictures From Paradise from Trinidad
and Tobago to Barbados and, finally, Jamaica this coming
June.

Images provided by Chevonese Fender and Robert
and Christopher
Publishers.