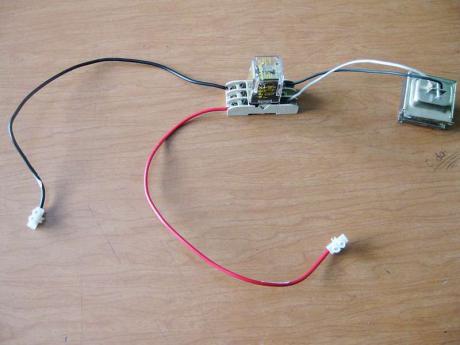 An alert would sound on the smartphone connected to the Speed Control Navigation System if the preset speed limit is exceeded.- Contributed 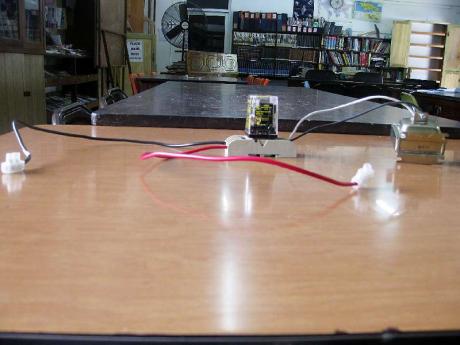 A mock-up of the Speed Control Navigation System's physical attachment to a motor vehicle. - Photo by Mel Cooke 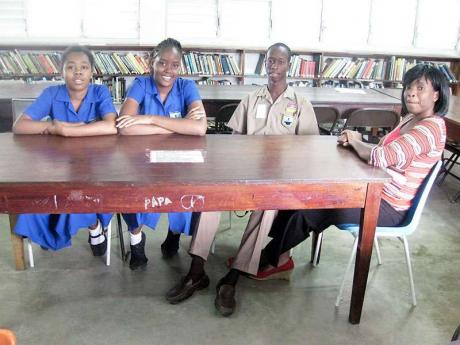 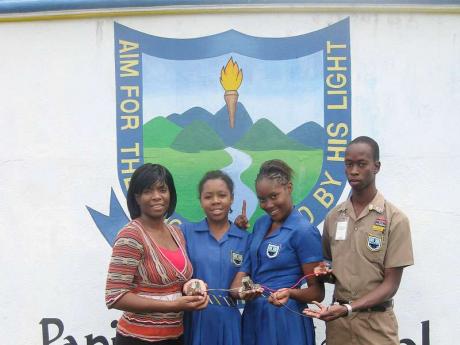 A group of students from Papine High School, St Andrew, has conceptualised a device which would allow the speed of a motor vehicle to be monitored through the combination of a device attached to the vehicle and a smartphone.

And while the Speed Control Navigation System the grade-nine quartet has come up with is relevant to any motor vehicle, their primary target group is the one they will most likely be a part of in less than a decade - young drivers. They intend for the set-up to allow concerned parents and guardians to monitor the driving of their youthful, often exuberant charges and take steps to secure their safety.

In late April, Sasha Williams, Melissa Gayle, Joel Grant and Latesha Levy, along with Health and Family Life Education teacher Audrey Burrell Dennis, made the short trip from Gordon Town Road to the Mona Visitors Lodge, University of the West Indies (UWI), to publicly present their idea. They carried a mock-up of the attachment for the vehicle, put together by auto mechanics teacher Sigmund Mighty for illustrative purposes only, to the Business Pitch Forum of the i3 Innovation High School Competition, organised by the Business Lab.

Williams told Automotives, "I came up with this idea to stop road fatalities. I saw so many accidents last year, on TV. I want to put a stop to it".

Gayle has a more personal accident experience, recalling her mother's tears when she heard that her father (Melissa's grandfather) had been injured in a motorcycle accident.

Grant said, "I like to solve problems and see ideas go into reality".

The Speed Control Navigation System was one of four ideas students at Papine High came up with. Another was also related to automobiles, the Awe Indicator, designed to allow a driver to put messages from a preset list onto a screen visible to those in the motor vehicle immediately following. The messages would advise of specific circumstances such as 'pedestrians crossing'. Another idea was Women's Natural, a bodysuit to redistribute weight temporarily for a certain shapeliness. Then there was the Fittin Mitten, gloves that would pamper the wearer's hands.

The Speed Control Navigation System went through a few stages before the on-board device was settled on. Initially, Williams said, she was thinking of a network of roadside devices which would detect that a car was exceeding the set limit and automatically shut it off or slow it down. That would not, however, be practical.

"We discussed the possible ways," Burrell Dennis said. "We looked at it for the advantages and disadvantages - who would monitor them, where it would be on the road. We them came up with having it on the car itself."

Grant explained that the device would have two sensors, one to the vehicle's speed sensor and the other to a dashboard-mounted navigation system. The data - speed and location - would be accessible via smartphone, an alert going off in the car (not so loud as to cause fright) as well as on the phone if desired speed limit is exceeded.

"The alarm in the car would go off only if the driver slows down. It is connected to a tracking device and a security company would also respond. Someone would call the driver and ask why they were speeding. If it is an emergency they will provide assistance," Grant said.

Papine High's guidance counsellor Brenda Stamp heard of the i3 Innovation High School Competition through the Ministry of Education and invited grades nine and 10 to
enter. She noted that the students also had to provide a business plan
for the presentation.

The group placed in the top 10,
but entering the competition seems to have sown an innovation seed in
the school. The group recently participated in an Innovation Day at Mona
Primary School and there is now a formalised Innovation Club at Papine
High.

And the effect on the participating
students has been obvious.

"It has given these
students a new lease on life. We can make the difference in the
society," Stamp said.

"Saving lives is a good thing.
Nobody wants to lose their lives, or the lives of their family or
friends," Williams said. There has also been a change in perspective, as
Gayle said "I did not take road accidents seriously before. I knew
about it before like a normal thing - everyone speeds. This has opened
my eyes. This thing can save lives".

Grant said the
project has had "a very big impact on my presentation skills, standing
in front of a crowd and explaining what we have come up with and what we
will be doing in the future to save lives".

"It is a
big boost for Papine High School. It is not just track and field, but
ideas coming to reality," Grant said.

Principal
Leighton Christie noted how important the project and participating in
the i3 Innovation competition has been to the
school.