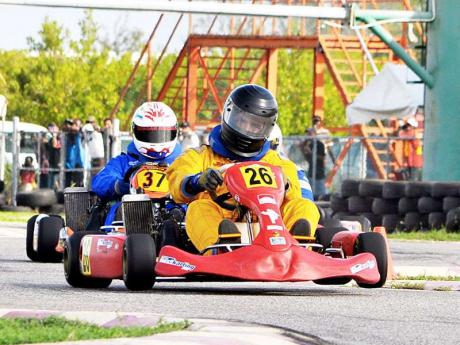 Peter Rae seems to be having the better of Garth Genus in their bumper-to-bumper rivalry in the Rotax Masters Class. The race was eventually won by Genus. - Contributed 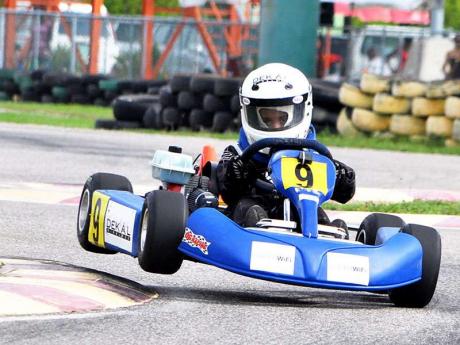 Five-year-old Zander Williams negotiating one of the sharp corners on two wheels, in the 50cc Class, during last Sunday's go-kart meet, at the Palisadoes Raceway.- Contributed 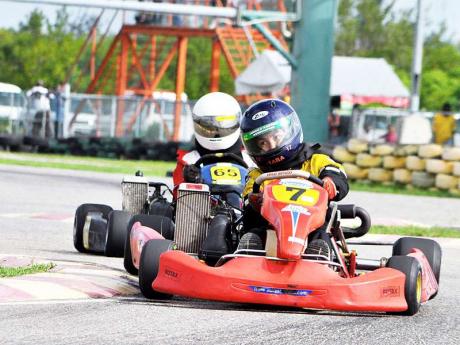 Tara Fong Yee, one of the two females who competed at the meet, stays ahead of Chad LeoHong in the Rotax Senior Class. - Contributed
1
2
3

At five years old he negotiates the sharp curves on the race track, two wheels in the air. This is Zander Williams' first go-kart racing season and already he is showing signs that he will be a force to reckon with in the future.

"Daddy, it felt fast and I knew it (the go-kart) went faster when it hit the curve," the Hopefield Preparatory schoolboy told his father, Neil. This was shortly after parading with the chequered flag in one of the four races he won at last Sunday's go-kart meet, held at the Palisadoes International Raceway, Kingston.

The youngster and four other karters shared the spotlight, after dominating their respective classes. His older brother Matthew made a clean sweep in the Rotax Senior Class, winning every event. He easily disposed of Tara Fong Yee and Chad LeaHong.

Fong Yee, who was one of two females to participate in the meet, did not disgrace herself, as she took the fight to the boys.

Attired in a helmet designed in the colours of the national flag, Joshua Sirgany was too much for MarcAnthony Eaton, Zachary Shields and Giovani Hui in the Rotax Mini Max Class. Thomas Issa did likewise in the Rotax Junior Class, beating Gordon McDowell, Tristons Emmons and his younger sibling Elias Issa.

It was the fireworks in the Rotax Masters Class which had the fans screaming at the bumper-to-bumper rivalry among Peter and Sebastian Rae, Sheldon Morgan and Garth Genus. It was Genus who upset the applecart, winning all four races in the class.

"I drove like I never did before, because Peter Rae is not an easy nut to crack and his kart was very fast, so I had to drive like hell. It was very challenging, but the victory was overwhelming," Genus, enjoying the best day of his racing career, said.

Genus was the only member of the NG Racing Camp who participated. There were reports that the outfit had an issue with the Jamaica Karting Association (JKA), involving tyres. The other drivers from the camp were notably absent from the meet.

This was confirmed by head of the JKA, Neil Williams, who said the issue was dealt with. Responding to questions on whether the absence of the other karters had an impact on the meet, Williams stressed that things went well.

"We had a good crowd, plus we also signed up a number of kids for the 80 and 50cc classes and the races were exciting," said Williams.