Spirited fight over rum - Subsidies pit CARICOM against US and Diageo 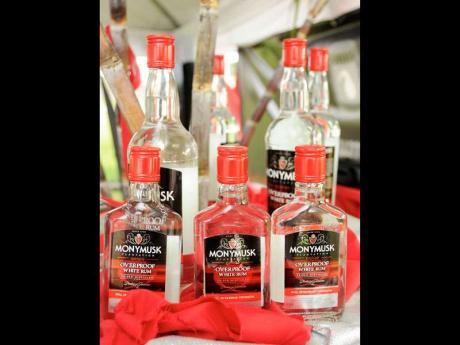 Flasks of the new Monymusk overproof rum bottled at Clarendon Distillery Limited at Monymusk in Clarendon. Diageo owns 27 per cent of the distillery. - Gladstone Taylor/Photographer

A few days ago, the CARICOM secretary general, Irwin LaRoque, revealed in Washington that CARIFORUM nations had begun a process which, if unresolved, will lead to a full complaint at the World Trade Organization (WTO) against the United States in relation to rum.

Following representations by the West Indies Rum and Spirits Producers' Association, the regional industry association, CARICOM governments last December formally expressed to the US their deep concern about measures being taken by the governments of the United States Virgin Islands (USVI) and Puerto Rico to provide multinational rum producers with subsidies under a programme that makes use of excise taxes on rum received from the US federal government.

CARICOM subsequently raised the issue at a meeting of the US-CARICOM Trade and Investment Council in March in Georgetown.

Then last week the CARICOM secretary general took the opportunity, during meetings with US officials in Washington, to stress the seriousness of the issue and its implications if left unresolved.

As a consequence a US-CARICOM technical meeting is expected to take place shortly.

This is intended to lead to political exchanges with the US Trade Representative (USTR) aimed at resolving the issue.

At the same time CARIFORUM ambassadors in Washington have been meeting with others in the US administration and Congress to make clear the Caribbean's concerns.

In a process that potentially sets David against Goliath, the Caribbean has initiated dialogue with the USTR, which challenges an arrangement that enables the USVI to offer one of the world's largest and wealthiest distilling groups, Diageo, huge subsidies.

The concern is, that, if the matter goes unchallenged, it will result in Caribbean producers seeing their presently significant share of the US market wiped out by subsidised product, and other large international distilling groups seeking to locate in the USVI and Puerto Rico to seek a similar advantage.

As with most trade disputes, the matter is complicated.

The Caribbean's case revolves around the fact that subsidies offered by the USVI to the multinational rum producers Diageo and Cruzan are inconsistent with WTO rules in as much as they involve prohibited export subsidies, make use of discriminatory taxation, and use such subsidies to cause adverse effects to the interests of other WTO members, in this case, the countries of CARIFORUM.

Specifically, the Caribbean's case relates to the application by the US government of a 'cover-over' programme which remits 98 per cent of all excise duties raised on rums sold in the US back to the US territories of Puerto Rico and the USVI.

In order to secure a greater amount of this 'cover-over' support, the USVI and Puerto Rico have since 2008 entered into new contractual arrangements with major multinational producers offering extremely generous concessions, subsidies and long-term support, in exchange for them agreeing to site their distilleries and production facilities in their territories.

In the case of the USVI, its government signed a contract in 2008 with Diageo that promised the company very large subsidies over a 30-year period in return for the company's commitment to produce locally all Captain Morgan rum sold in the United States.

Other deals have been struck by Bacardi and Serrallés with Puerto Rico.

Estimates suggest that in these new contracts, the value of the operating subsidies alone exceeds the actual production cost per litre of bulk rum. It is also believed that the combined new production capacity, which is planned as part of the agreements, will be equivalent to at least 80 per cent of current US rum consumption.

Unsurprisingly, rum producers in the Anglophone Caribbean, Haiti and the Dominican Republic have viewed this development with alarm.

So, too, have CARIFORUM governments, which have recognised the dangers for themselves, and the region's largest agriculture-based export industry which generates an estimated US$500m in foreign exchange and well over US$250m in tax revenues, which is to say nothing of the industry's role as an important provider of employment or its close relationship to tourism.

In this way, the US is damaging one of the few competitive industries that CARIFORUM nations have and which helps underpin the economic viability of small and sometimes vulnerable Caribbean states.

For this reason, the dispute is at a government to government rather
than industry level.

There is also a sense that the
manner in which the cover-over programme is being used raises serious
questions about US consistency in relation to its international
obligations under WTO rules.

The US has for many years
taken a leadership role in promoting strong WTO disciplines on trade-
distorting subsidies, so it is surprising that it has allowed a
situation of competitive harm to arise.

International distilling groups may have more
political and economic muscle to flex in Washington, London and Brussels
than do the countries of CARIFORUM, but the region has the facts and
strict rules of world trade on its side.

This is
therefore an instance where Caribbean governments and the people of
CARIFORUM need to stand tall, draw the line in Washington and, if
necessary, in Geneva, and fight to win.

Rum has a
special place in the hearts and minds of Caribbean people. It is a
product that brings identity through small producers to the islands and
countries of CARIFORUM from which it comes.

Unlike the
product of large multinational distilling groups the success of
CARIFORUM producers does not result from artificial tax breaks, transfer
pricing or subsidy.

Instead it is an industry
dominated by small local distillers whose product is export-oriented,
brings much needed foreign exchange, adds value to primary agriculture
and provides significant levels of tax and revenue to governments
struggling to deliver social programmes.

That is why
rum has always been a product worth fighting for, as Europe knows to its
cost and the US is about to discover.

David Jessop
is director of the Caribbean
Council.david.jessop@caribbean-council.org