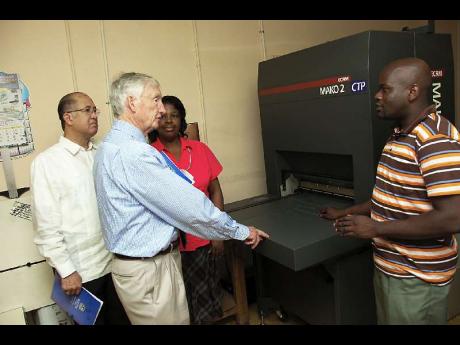 An unnamed employee (right) of BCNS Printers explains to Roy Megarry, former JN Small Business Loans (JNSBL) director and founder of Tools for Development, how the computer to plate technology works. BCNS Printers was able to purchase the equipment with loan financing from JNSBL to maximise the printery's operating capacity. BCNS co-founder, Beverley Linton, is in the background. 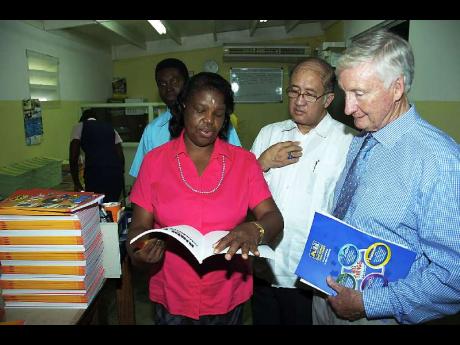 Beverley Linton, a founding principal of BCNS Printers in Kingston, shows a finished product to Roy Megarry (right), former JN Small Business Loans director and founder of the Canada-based Tools for Development, during a tour of the printery's facilities on April 30. Also viewing the product is Parris Lyew-Ayee, chairman of JNSBL.
1
2

Cedric and Beverley Linton waited 16 years to take out what for the family business was a big loan of just over J$2 million to procure stock and upgrade machinery. That was four years ago, but it helped position their company to take on big jobs today.

The couple's 20-year-old company BCNS Printers Limited, which now employs 25 and operates from Norton Drive in Kingston, has mainly been run on cash flow and the sale of personal property.

Machinery - all refurbished, second-hand equipment - was bought and paid for in instalments, from Germany and local companies.

The small business, which now also employs daughters Nena and Stacy, has saved money by training its own workers from right out of high school, and continues to do this even though their recruits are routinely snapped up later by larger printing companies.

BCNS, offering printing and graphic design services, is now doing business of about J$40 million annually, but these are times which are much changed from peak revenues of four times this amount eight years ago, before local companies began doing some of their own in-house printing of letterheads and business cards with small machines.

Yet, while times are harder, it is easier to borrow money now, says co-founder Beverly Linton.

"Now it's a different thing. With NCB lending to women in business at nine per cent, it's much easier to get a loan now. But originally, Jamaica National was the one at the time willing to take the risk. They were lending from J$350,000 upwards," said Linton.

BCNS took out the J$2.3 million loan back in 2008, which was borrowed at 10 per cent to purchase a MAKO CPT machine to handle larger printing volumes.

"When we started in 1992, we were both employed. Mr Linton decided to leave his job and I remained on mine at Cable and Wireless where I was to stay for 30 years. He was at Speedographic printers. I came in on days off, weekends and evenings and joined him. He was doing sales and running machinery - everything," said Mrs Linton.

The couple started off with the old-time Multilith press and then acquired two smaller printing presses.

"All the things we bought were from someone who had closed down - a retiree - including cutter, printing press, plate burning and a light table. It was a very a basic operation. We spent J$1,500 and small loan of a few hundred dollars from self-start fund where we used stove and refrigerator and washing machine as collateral," she said.

BCNS started out with eight employees, including a pressman, receptionist and one man for the artwork, and the Lintons.

There were no big contracts to start with. Even so, small print jobs flowed their way from clients such as ICWI, UWI Medical Journal, Berger Paints, Hi-Lo Food Stores, Mead Johnson and others, which provided the first sources of income for BCNS.

They have all remained clients of the company, said Linton - including the companies that have expanded over the period and those whose operations have peaked and scaled back on orders.

"Some have scaled down like HD Hopwood. But, they still send us jobs. Our clients also include Abbott International, Carib Star Shipping and Cari-Med. We have had the contract for Dairy Industries for more than 10 years. These companies, and Musson Jamaica, these are our backbone," Linton said.

BCNS considers 2000 to be a benchmark year - that's when it started landing big contracts.

"Our children attended UTech and the marketing department supported us. Then came Musson, Dairy Industries and Scotiabank. We have also been printing for NCB for many years where one of our daughters worked before joining the company," Linton said.

The machine was refurbished, shipped and reassembled in Kingston.

The BCNS workshop, which adjoins the Lintons' home, was also expanded to accommodate the larger press, costing J$3 million.

"We paid from cash flow, sale of personal property and salary. We were just scared of borrowing money when people were losing their homes," said Linton.

For the perfecting machine and the GTO two colour - the couple combined personal savings and salary to buy these second-hand. "The five-colour press cost J$19 million. Once the jobs came in and we got a spin-off, we paid down on it," Linton recalls.

"In the end, we are the persons owed the most by the company."

An initial loan was taken from NCB to buy printing stock, but soon after, the JN BizGrow loan in 2008 was used to upgrade from film to a new process, including from computer to plate machine.

The couple later borrowed more from JN to pay off the NCB loan which was at a higher interest rate.

The plant represents most if not all of the couple's savings.

They are hoping that the operation will continue to show a profit and eventually underwrite their retirement.

But the business still faces challenges, including difficulty recruiting sales staff, limited resources for newspaper and radio advertising, and competition from larger printers locally and overseas which are able to store supplies. BCNS can only afford to buy supplies as needed, and gets hit by price fluctuations as a result.

"The root problem though is the economic climate. Many clients have purchased small printing machines for themselves and do letterheads, business cards and many other things for themselves," said Linton.

"With the advent of compact discs, we also lost a lot of business before we could provide this service."

But having missed that boat, BCNS came up with another idea: monogrammed thumb drives.

Still, buyers prefer to use printers in United States and Trinidad where turnover is quicker.

Linton insists that her company is competitive; that it is fast at completing jobs.

"We meet delivery time all the time. We do varnishing, book binding and have artists and designers in-house. Everything is done here. It makes us competitive."

Linton believes the Government can help hers and other small businesses more by sharing printing jobs more widely and offering concessions on all raw material.

"We get concessions on chemicals, but pay full duty on plates even though these are used together," she said.

Yet, another challenge is the absence of a good maintenance service in Jamaica for machines of German origin, so downtime can be a problem. And like most businesses, BCNS has high phone and electricity costs.

"It's hard to be profitable with these costs. The machines have to run with a certain volume electricity," said Linton.

The company turns over J$40 million per year, but: "Eight years ago, revenue and profit was four times better," Linton said.

"We have to keep salaries low. We also have problems with delinquent customers. We have had a lot of losses with people who have run away without paying. Now we are crying."

But the company still finds resources for community outreach. Annually, students are taken in from two schools, Edith Dalton and Papine, for work experience.

"Dozens of students have passed through. We are like a school. The larger printers take away our staff the moment we train them. They entice our staff every day. We don't complain. This is part of the feature of our organisation that we extend ourselves. We now have two UTech graduates who help us with our sales," Linton said.