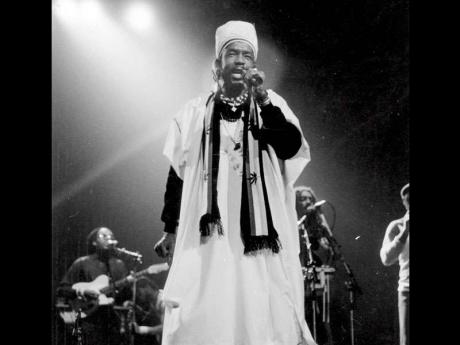 Peter Tosh is renown and revered for a number of songs, many with rebellious bent. Among Tosh's better known tracks are Legalise It, Fight Apartheid, Stepping Razor, Equal Rights, Creation and Johnny B Goode.

However, there is one track, over seven minutes long, which was not recorded in a studio which made Tosh a legend. It was made on April 22, 1978, at the National Stadium during the landmark One Love Peace Concert.

It is a concert from which the most enduring image is Bob Marley entwining his hand with those of then Prime Minister Michael Manley and Opposition Leader Edward Seaga in what turned out to be a futile peace gesture - and which earned Marley a peace medal.

During his performance Tosh abandoned the song at two points and gave speeches in which he addressed multiple ills of the society - apartheid, marijuana, Jamaican 'politricks,' 'bad word' laws, the whole 's-tstem,' nuclear weapons. And more marijuana. It is the second speech, before the closing Legalise It/Get Up, Stand Up, which had the greater impact.

And, by some reckoning, it resulted in a physical impact on Tosh, as he was soundly whipped by the police at Half-Way Tree Police Station a few months after, in an incident which escalated after Tosh was accosted by a plainclothes officer while he was smoking a spliff.

The speech is a highlight of the 2000 JAD Records release Peter Tosh Live at the One Love Peace Concert. The track listing is Igziabeher, 400 Years, Stepping Razor, Intro Rap, Burial/Speech, Equal Rights, Speech and Legalize It/Get Up Stand Up.

Speaking in between songs was not new to Tosh, but the occasion 34 years ago was special. Bob Marley had been encouraged to return from England, where he had gone after being shot ahead of the 1976 Smile Jamaica concert. It was also two years after Tosh had released his debut solo album, the acclaimed Legalise It, and the concert was to be attended by Manley and Seaga, along with the top brass of the People's National Party and Jamaica Labour Party.

While Tosh's speech has been largely overlooked, the concert's performers outside of Marley and Tosh have been virtually forgotten. The line-up was The Meditations, Althea and Donna (of Uptown Top Ranking fame), Dilinger, The Mighty Diamonds, Culture, Dennis Brown, Trinity, Leroy Smart, Jacob Miller/Inner Circle, Big Youth, Beres Hammond, Tosh, Ras Michael and the Sons of Negus and Bob Marley and The Wailers.

Of those, singers Joseph 'Culture' Hill, Dennis Brown, Tosh and Marley have all died.

Small parts of Tosh's One Love Concert Speech, which is widely available online, cannot be printed in newspaper - and is much better heard in his voice, anyway.

However, he starts out by targeting copyright issues ("Talking bout pirate, you all have some likkle pirate now weh come from Merica an' all bout wid dem camera an dem TV business fi do wah? Get rich offa I an I) and closes with caustic commentary on mortality ("So if oonu waan go a heaven a fi oonu business. I will be here a billion years!).

And one of the topics he addresses is as relevant now as it was 34 years ago, as Tosh said "I am not a politician, but I suffer the consequences".