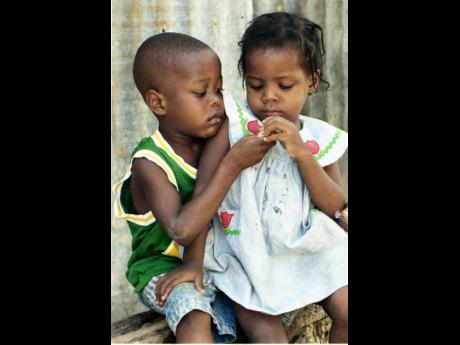 n this 1998 photograph, Dean Smikle, four, shares a biscuit with two-year-old Chinel Cunningham along Rosemary Lane in downtown Kingston. We don't know where these two are now, but according to Martin Henry's assessment of the dire state of the education sector, school financing is perhaps more a challenge for the now teenagers, and others like them.

The students were up in arms about being barred from exams over fees they owed. They were angry at the university, not at the Government, the biggest 'samfie' man in the country. And I mean government in general, not any particular administration. They should have been at the gates of the Ministry of Education and the Ministry of Finance instead of preventing paid-up students from writing their examinations.

Like everything else, education costs money, and someone has to pay. What the big samfie man has done is to fool up otherwise intelligent students that political sentiment for access to education can, in fact, pay the bills incurred by institutions in delivering educational services.

Government has cut subventions to UWI. Like any other 'business' confronted with a declining revenue stream, the institution faces a couple of stark options: It must seek alternative income or cut back on the size of its operations. The university must raise (and collect!) student fees, find rich benefactors, or divert resources into generating more income by other means. Or it must adjust student and staff numbers downwards to match income from declining subvention, and low and static student fees. It is that simple.

But no! The Government, while cutting subventions, at the same time wants growth in student numbers, growth with low fees.

So the university is handed the proverbial
basket to carry water. And the UWI is not alone in this three-card
trick. The whole education system faces essentially the same problem.
UWI is a regional institution, to which the Government of Jamaica
contributes; the Government's own national university, the University of
Technology (UTech), Jamaica, faces the same problem of static
subvention, burgeoning student numbers on low, static fees with no
private-sector sugar daddy in sight.

Entire
institutions previously paid for in full by government, like the School
of Public Health and the School of Nursing, have been transferred to
UTech without the same level of budgetary support following their
transfer. Students either have to pay (unaffordable) commercial rates or
the available subvention spread more and more
thinly.

While
the university brags about acquisitions and growing student numbers, it
is seriously suffering from imperial overstretch, running a deficit
budget, and, in strict financial terms, each additional student is a
liability and a threat to fiscal balance and the quality of services
which can be provided. The typical clientele of 'poor people pickney'
can pay no more from personal resources.

Whatever
sentiment and pride may suggest, the university, trapped between low and
static subvention and low and static fees, is fiscally in disincentive
mode for expansion. It is forced by government policy and by public
expectation to attempt the impossible task of operating as a business,
while providing education as a social service. Something has to give,
which is usually quality, providing another reason for student
dissatisfaction and protest. The university is now desperately seeking
to right-size its budget by saving on paper!

The big
samfie man has not managed to dupe only the tertiary level with his
three-card tricks but has had even greater success at the secondary
level. One of the first acts of the last administration which was formed
by the Jamaica Labour Party was to remove cost-sharing school fees and
to refund parents who had already paid. There was no equivalent
subvention compensation.

But even when cost-sharing
was running, it was not beyond the gymnastic government to ride, at the
same time, two horses heading in opposite directions: Students, through
their parents, must share the cost of their education; but no student
must be turned away who cannot pay. And schools shouldn't even think of
expecting the honourable government to provide a make-up subsidy for
those who cannot pay. Schools must simply deliver more with
less.

To continue the proud tradition of political
samfie-ism in education, the current and shiny new minister of
education, the Rev Ronald Thwaites, has announced ahead of a delayed
Budget that there will be no additional money for education. But the
expected rider attached is: schools must be prepared to do more with the
same by improving efficiencies!

Too much on
education?

Perhaps (heresy! damnable heresy!) the
country is already spending too much of its scarce resources on
education while neglecting the legitimate needs of other sectors. I
fully agree with Minister Thwaites that more of the education budget
should be directed to the foundation in early childhood and primary. In
fact, this is now a constitutional obligation. The new Charter of Rights
has rather rashly given every child who is a citizen of Jamaica the
right "to publicly funded tuition in a public educational institution at
the pre-primary and primary levels".

If this brand
new 'right' is not to be sheer samfie-ism, it has to mean more than mere
access to school. The State must commit beyond mouth to money to
provide quality with access.

Meanwhile, tertiary
students should take out a mortgage on their own education as an
investment in their future professional income. The big problem is that
the big samfie man has never provided an adequate financial base for a
genuine revolving loan fund for education to which all students can have
access without means testing to demonstrate how absolutely impoverished
they are and finding richer guarantors.

It's not just
education which suffers from the three-card tricks of the big samfie
man. Everywhere else does. Take public transport through the Jamaican
Urban Transit Company (JUTC), which is back in the news for its lavish
losses. A newspaper report last week says: "The Jamaican Urban
Transit Company ... is raking in more revenue on the routes being
regularised by police action, but it is very unlikely that this will be
enough to turn around the company's fortunes ... . Figures made
available through the auditor general's office showed that the company
lost $2.2 billion in 2009-2010 ... . The situation has worsened since,
and for 2010-2011 the losses amounted to $2.4
billion."

Listen to permanent secretary in
the Ministry of Transport, Audrey Sewell, explaining the reasons for the
losses. Sewell, the news story said, attributed the ballooning losses
to three reasons, primarily the decline in the annual subvention from
Government to the JUTC. The other contributors were the loss of revenue
to illegal transportation operating on the exclusive routes; and the $70
difference between actual fares and the state-subsidised fares paid by
students and the elderly, for which no refunds are
provided.

Now listen to this from the news story!
"However, it is clear that the Government is in no mood to
entertain a fare increase at this time, and is insisting that the
company address its inefficiencies instead." Rear Admiral
Hardley Lewin must have been pretty desperate to have taken on the
impossible task of managing director.

Like a
university pushing saving on paper to balance its budget, the police are
expending a lot of time and resources yanking illegal taxis off
exclusive JUTC routes. But MD Lewin is conceding that "removing the
illegal operators was not good enough because if the JUTC is unable to
put enough buses on the routes to meet the needs of the commuters, the
demand for the 'robots' would remain."

The police
themselves are being given a 6 for a 9 by the big samfie man. Fight
crime. Maintain law and order. Provide professional services, they are
ordered; but Government can't/won't increase the number of personnel.
Police personnel don't have vehicles to respond to calls. Vehicles don't
have gas or tyres. Protective gear is scarce. They will just have to do
more with less, get the illegal route taxis off the road and reduce the
murder rate from the current 62 to 12 per 100,000 by
2017.

In my view,
this is one place where some education dollars should be directed. The
first duty of the State is the safety and security of citizens and their
property through the maintaining of law and order and the delivering of
justice.

Health fees were removed from state medical
services by the last administration without compensatory subsidies, but
services were to be maintained, if not improved, in a system already
short of resources. So everyone has privileged access to wait forever to
see a doctor, and to go to public pharmacies facing chronic drug
shortages.

The list goes on. But the big samfie man
sometimes even seeks to get private enterprise, which has not mastered
the samfie art of running profitably on words, to provide subsidies to
government policy and still remain profitable. It is not too bad now,
but that's what all government price-fixing does. The Government is
still fixing and holding down fares for private transport operators, for
example, while the price of gas and maintenance, and even of
operational fees charged by the same Government, are climbing. Operators
have to engage in all kinds of contorted pleadings with the big samfie
man for fares to barely inch upwards.

The concession
forced by the lawless behaviour of the UWI rampagers (whose action the
minister of education merely described "unfortunate") was not for the
big samfie man to assist them with paying the fees owed to a struggling
institution but a further deferment of payment of the money
owed.

Martin
Henry is a communication specialist. Email feedback to
columns@gleanerjm.com and
medhen@gmail.com.