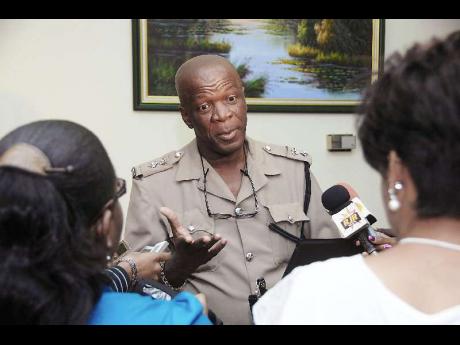 SSP Delroy Hewitt has come under fire from JFJ, but Orville Taylor argues that the rights group's campaign against the cop is a travesty of justice. - Ian Allen/Photographer

The national anthem is a prayer, but more like a wish and delusion. It says, "Justice, truth be ours forever." That is precisely where the problem 'lies'. The order is wrong. Justice can never be put before truth, but that is exactly the situation in this land of wood, water and homicides.

For some time now, but more intensely more than a decade since the formation of Jamaicans for Justice (JFJ), the island's justice system has come under criticism, with particular emphasis on the police. Doubtless, some of the negative sentiments against the constabulary are solidly based, because many of the cases involving fatal police shootings are so blatantly incredible that only the most dishonest police apologists could support the official account.

Of course, there are occasions when a demented man might think that his imaginary gun could have actually harmed the well-armed lawman or that his toothpick is a deadly weapon.

However, JFJ and other local and international human-rights groups have taken the 10 per cent of police homicides which are controversial, and used them to broad-brush all the others as extrajudicial killings. This is a cruel and almost malicious typification, especially given that the majority of Jamaican police personnel operate within the confines of the law and more or less obey the use-of-force policy. If that were not so, the country would long have plunged into a state of anarchy.

In my own criticism of the police, persons who wish to conceal their wrongs have come to the defence of the cops, saying that in the absence of evidence to contradict the official police reports, they have to assume that all of them are telling the truth. Thus, they flash the legalese cliché, 'innocent until proven guilty'. Nonetheless, there is a major difference between innocence and being not guilty, and despite many criminal police walking around with less charge than a BlackBerry battery, the citizens, the fearful witnesses, the victim, the Devil and God all know what happened.

At present, Senior Superintendent of Police (SSP) Delroy Hewitt has been given an acting promotion as assistant commissioner and put in charge of the Mobile Reserve Division. JFJ, with a coterie of attorneys in its executive, had strong objections to his earlier promotion to SSP because of complaints and allegations made about him.

Reports, allegedly by citizens about his misconduct, have yet to be substantiated, and in any event, he has not been charged either departmentally or within the courts. One would think that with the brilliant legal minds at its disposal, JFJ would have found something of substance to present before a judge, who uses the same legal standards and arguments they make their living by, to make even one accusation stick.

Instead, the organisation has asked the Public Service Commission (PSC) to take on hearsay and not appoint SSP Hewitt. Is JFJ asking the PSC to use a lower legal standard than the courts which its lawyers operate within? If this were a case where an ordinary citizen or the police had unsubstantiated allegations against a run-of-the-mill Jamaican from the inner city, would the lawyers be seeking to have the court rule in their favour?

The issue is not whether or not SSP
Hewitt has misconducted himself. What matters is that he has not been
proven guilty of any offence in a court of law or by a disciplinary
panel. Whatever the truth is, lawyers have lower standards regarding
truth than scientists and academics. Indeed, they are, on the whole,
interested in justice, which has to do with procedures and rules of the
court as opposed to absolute facts.

Therefore, it is
for this reason that not only the dishonest and corrupt members of the
force are to blame for the shortcomings in the justice system and
lawlessness in society. Without apology, my contention is that lawyers
are just like the police they accuse: not interested in truth. Indeed,
there are occasions when prosecutors and the police seem hell-bent on
keeping persons in custody or convicting them, even when the evidence is
as weak as a man who feeds on bag juice and banana
chips.

Sometimes the zeal of the police and court
officers can be understood because oftentimes they 'know' that the
perpetrator committed the crime but the case is weak. Thus, evidence
might be doctored, or fabricated, as was revealed in a recent case which
has a policeman on the run.

On other occasions, such as the painful
case of David Foster, a woodworker, who was accused and almost convicted
of sex crimes, the innocent gets punished. Veteran attorney Valerie
Neita Robertson and neophyte Tamika Harris must be commended, but in
celebrating their victory, may they be asked what would they have done
had they been engaged by the real culprit who confessed to them with
client-attorney privilege?

Indeed, there are defence
lawyers who take cases which run against their consciences and any sense
of decency. A lawyer who tries to make a murderer or other criminal
avoid the consequences of his horrific action has no moral right to
speak to the high homicide rate in this country. True, criminal
attorneys have to find clients in order to eat, and maintain their
families, but many of them bathe in the very blood money which they are
speaking against.

We know that there are lots of
thieving lawyers and those who would pervert the course of justice
(whatever that is). Furthermore, the few that get defrocked after due
process and countless opportunities to make restitution, where
applicable, are the tip of the iceberg. Doubtless, many more go right to
the edge, touch the line and almost cross it. Simply put, the legal
profession (like so many others) is honourable, but lots of lawyers are
not.

Therefore, let the distinction of
innocence v not guilty be made. The rules of natural
justice, which govern every type of trial and tribunal, allow for an
accused person to be represented by an individual of his choice. In a
court of law, that has to be an attorney. However, 'representing' is not
the same as 'defending' a client. Never mind that the person who is
accused is called the defendant. If he is guilty and the lawyer knows
that he committed the crime, he or she is just as morally deficient in
making him plead not guilty or to try to 'get him
off'.

Law is not about justice, because the spirit of
the law doesn't always take precedence. One might know that the
intention of a party to a contract is obscured in cleverly crafted fine
print. Also, workers in the security industry and other places of employ
are de facto workers, but their skilfully penned
contracts make them contractors. How do the lawyers
sleep?

Most killers get away

With
all the arguments regarding the homicide rates in this society and
violence on the whole, the main issue for me is that most killers get
away with it, and I do not mean the police who are involved in
'controversial' or 'extrajudicial' killings. Apart from the modest
apprehension rate by a still-outwitted constabulary which only manages
to identify and capture just around a third of the suspects, the
conviction percentages are even less impressive, with a prominent
defence lawyer estimating 10 per cent, if guessing
generously.

No scientific study has been done to
confirm the ratio of those who are acquitted because of poor policing or
prosecuting or simply spurious charges. Nor is there information about
the number of persons who walk because of technicalities, and indeed,
nothing is known about those who are convicted because of false
witnesses or corrupt police and court personnel. The problem is, all
those who are freed are filed as not guilty, despite my hypocritical
defence lawyers knowing the gory details of their
crime.

Thus, before the lawyers jump on the police,
let them take the substance from the corner of their own eyes, because
although the truth is inconvenient, it's 'matter'.

Dr
Orville Taylor is senior lecturer in sociology at the UWI and a radio
talk-show host. Email feedback to columns@gleanerjm.com and
tayloronblackline@hotmail.com.