Too in love with CARICOM 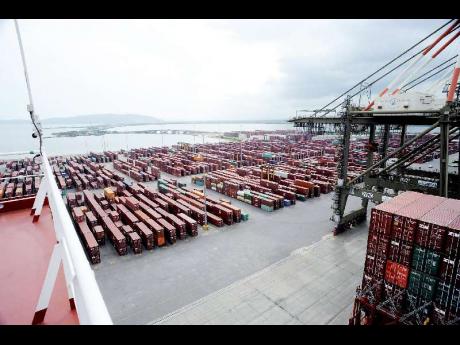 The port of Kingston is seen here in August 2010. Chris Tufton says we must cut out the emotion when talking about CARICOM. - File

Jamaica has had a long romantic relationship with CARICOM, once characterised by sentiments and emotions rather than by economics and pragmatism. The economic benefits of that love affair have been primarily one-sided.

This is particularly as it relates to the twin-island Republic of Trinidad and Tobago. The trade figures between both countries tell a story of Trinidad being the suppliers to the Jamaican market with limited reciprocity. With Trinidad and Tobago accounting for most of the nearly US$1.2-billion trade deficit between Jamaica and CARICOM, things appear to be getting worse.

The Trinidadians may well argue that they have always focused on exploiting the largest and most lucrative market in CARICOM. So they pass laws and encourage policies that cause their manufacturers to retool, access cheaper financing, and develop a productive base from either their natural resources (primarily oil based) or by using imported raw material to add value, using a low-cost energy platform. They have never seemed emotional or sentimental about the relationship with Jamaica. Simply put, Jamaica was a market to be targeted and supplied.

And as is typical with the evolution of trade, when it became more economical for trade to be converted to direct investment, Trinidad entrepreneurs started to court undervalued or distressed assets in Jamaica or started new greenfield projects to establish more permanent arrangements. So, in rum manufacturing, air transportation and insurance, just to name a few, Trinidadian entrepreneurs are here, and here to stay.

Jamaica, on the other hand, is consistently emotional about regionalism and the CARICOM family. Speech after speech by most of our prominent policy leaders are usually laced with themes of the need for regional integration and regional identity. At the same time, Jamaica has always appeared ill-equipped to compete in the CARICOM space. There are many reasons for this. These include our lack of focus on the things that matter and have impact on our investors and consumers within this market space.

It cannot be enough to preach regionalism if regionalism means gridlock within the CARICOM Secretariat on important decisions. Similarly, lopsided trade because of rules within the common market, which offers unfair advantages to some countries, needs a response.

Jamaica's failures within CARICOM are both man-made and natural. First, our population and market size make Jamaica more attractive to CARICOM entrepreneurs than would the CARICOM market attract Jamaican entrepreneurs. The markets of our other CARICOM partners are small and fragmented, making it difficult to achieve economies of scale and, therefore, costly to service. Jamaica's geographic positioning, exposure to North America, and our large diaspora community offers a lot more attractive prospects for our local entrepreneurs to send their goods and services north.

Where interest exists in CARICOM markets, too often those interests are resisted by non-tariff barriers designed to discourage Jamaican exporters or investors getting into certain markets. Perhaps because of size and a fear of job loss as a result of competition, the smaller markets appear not as open as we are in allowing access. There are a number of cases of Jamaican goods being detained at ports of entry for reasons that Jamaican officials don't normally apply to our CARICOM partners' goods coming in. Jamaican patties and Vienna sausages come to mind. And try getting an actionable decision out of CARICOM and you will quickly appreciate the folly of ruling by absolute consensus.

Make no mistake, however, that as a country we have also contributed to these unfavourable trade terms with CARICOM. We have flirted, but not fully courted. We talk about CARICOM but do little analysis on how to exploit what CARICOM may have to offer directly from its markets, or indirectly as a strategic platform to enter other non-CARICOM markets. Worse, we have pursued a macroeconomic-policy framework featured by high cost of capital that discourages companies from investing and retooling, rendering them uncompetitive within CARICOM, even with free market access. On these issues we have to have to bear full responsibility.

There are other areas of CARICOM we have failed to adequately address, contributing to our own uncompetitiveness.

Chief among these are energy subsidies and the conditionality for free trade access in manufacturing. On the energy issue, Jamaica is clearly at a disadvantage based on its high cost of energy (not just within CARICOM). Trinidad clearly gives a subsidy to its productive sector, which makes it better able to produce goods at a lower unit costs per amount of energy consumed. Somewhere between US$0.03 to US$0.05 per kilowatt-hour is a far cry from the 30-40 US cents Jamaican manufacturers have to contend with.

So many persons have advocated, including, most recently, Opposition Spokesperson on Energy Gregory Mair, for a frank discussion on the issue. Mair's concern that the principle of a common market does not reconcile with one member of that common market benefiting from subsidies that are being applied which will, in turn, be used to compete against other players in that same space who have not enjoyed that similar subsidy.

Given that this subsidy is applied across the board to all Trinidadians, existing trade rules do not consider it a subsidy. However, within the common market space, in practical terms, this does offer an advantage to Trinidadian manufacturers. Successive governments have failed to follow up and resolve this issue. This appears an emotional, not a pragmatic, approach to regionalism.

Let's be clear. Trinidad is well entitled to offer to its nationals any advantage in its own interests, but should Jamaica allow that advantage to place its investors at a disadvantage? On this issue the principle of reciprocity appears to be absent. Jamaica must be more assertive on this matter.

The other issue involves the criteria on which goods qualify under CARICOM rules to have access to the common market space. There is a concern that raw material sourced extraregionally are being imported into the CARICOM space, benefiting from duty waivers that would normally apply under the Common External Tariff and further benefiting from energy subsidies and limited value added, before being finally sold into CARICOM at a major advantage over local producers.

The Treaty of Chaguaramas does allow for waivers for goods and raw material not sufficiently produced within CARICOM, and there are rules governing the extent of value-added processing that must take place. There are many who feel that the verification of that process is suspect, and Jamaica has done very little to push for a review. Hopefully, with the review of the treaty pending, this will be done.

I think CARICOM still has a role to play in the interests of regional development. However, Jamaica's relationship with CARICOM needs a dose of tough love or pragmatism. The economic value of CARICOM to Jamaica needs to be reviewed with a focus placed on what can be practically achieved and the rules that are required to truly give us a level playing field.

Beyond economics, CARICOM should narrow its focus on at least four critical issues, where every member can realise tangible benefits from regional effort. These are education, regional security, natural-disaster management, and international lobbying on mutually agreed issues such as climate change, food security, and international trade.