Clearing the air on OUR, JPS and energy 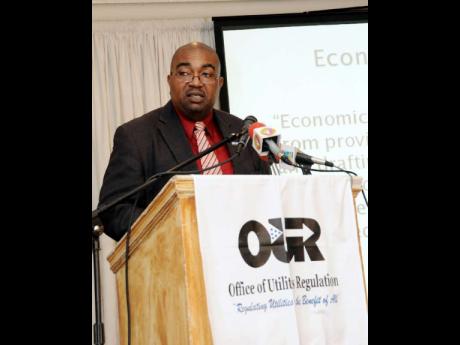 The Sunday Gleaner of April 22, 2012 carried an article titled 'Shock treatment: Can JPS do more to reduce energy cost?', which made reference to the role of the Office of Utilities Regulation (OUR) in the procurement of new electricity-generation capacity for the national grid.

The article gave only a partial picture of the OUR's role; and it was also deficient in its technical analysis.

In July 2007, the OUR was given responsibility for the preparation of the least-cost generation expansion plan, and oversight of the procurement process for the addition of new electricity-generation capacity to the national grid. In carrying out these activities, the OUR has been guided by the National Energy Policy, and by the legal and regulatory framework for the electricity sector.

The policy followed by the OUR is set out in the document 'Guidelines for the Addition of Generating Capacity to the Public Electricity Supply System', which is publicly available online at the OUR's website, our.org.jm.

During the planning process, all practical generation possibilities are subjected to thorough technical and economic evaluations so that an optimal, long-term solution can be identified. The generation-expansion plan also includes the configuration of the transmission and distribution system, and the required investment to realise the optimal generation system.

The OUR prepared the 2010 generation-expansion plan, which indicated a requirement for 480MW of new and additional baseload-generating capacity, to be commissioned in two tranches: 360MW in 2014; and 120MW in 2016.

The OUR issued a request for proposal (RFP) for the 480MW in December 2010. The requirement was structured to procure 360MW of baseload generating capacity for 2014, and 120MW for 2016, in accordance with the generation-expansion plan. The objective was to replace 292MW of ageing and inefficient generators with more cost-effective and efficient generation solutions, and to provide for demand growth.

The RFP supported the National Energy Policy's preference for natural gas (NG), which states, inter alia, that: "In the short to medium term, natural gas would be the fuel of choice for generation of electricity and the production of alumina." However, the RFP did not preclude the submission of other options. Bidders could have submitted any technology that provides firm capacity. Bidders whose proposals did not have natural gas as their primary fuel were required to have fuel-supply agreements for their fuel of choice.

However, entities submitting bids using natural gas were encouraged to propose dual-fuel plants, and to have a fuel-supply agreement for their secondary fuel. They were duly informed about the national liquefied natural gas (LNG) project, which would make natural gas available for their plant operation.

The national LNG project, led by the steering committee outside the ambit of the OUR, is in the process of securing the natural gas supply and the necessary infrastructure for Jamaica. It is anticipated that natural gas will be available to meet the schedule of the proposed 360MW generation expansion. There is ongoing collaboration between the OUR and this steering committee to ensure that both projects are coordinated.

In the past, additions to Jamaica's generation capacity have, for various reasons, been done largely on an emergency basis. This procurement is the first to take place on a planned and properly structured basis, and its objective is to secure the best and most suitable generation at the best cost available. It is also designed to improve overall system efficiency and reliability by replacing old and inefficient plants.

The RFP was advertised internationally, but only one bidder responded. This sole bidder was the Jamaica Public Service Company (JPS), which submitted one main bid and three alternative bids based on combined-cycle gas turbine (CCGT) technology and on reciprocating diesel engine (medium speed diesel - MSD) technology.

The OUR had the bids evaluated by an independent, well-established international consultant firm, which was also selected through an international bidding process. The consultants examined the bidder's ability to implement the project proposal, and the technical appropriateness and soundness of the proposal; they also did an economic assessment of the proposal, which took into consideration:

i. The proposed tariffs;

This process sought to determine the best overall value to consumers. Where proposed plant performances are similar, proposals would then be ranked according to the proposed tariffs.

The expected value to consumers is based on the OUR's determination of the expected impact of the proposals on the system generation cost and consumer tariffs. Proposals which, when integrated into the generation least-cost expansion plan, result in the lowest costs to consumers in the long term, are ranked highest. Resulting from the rigour of the analysis, the CCGT proposal, operating on natural gas as the primary fuel, was deemed to be the more cost-effective option, rather than the reciprocating engine proposal.

The variable operating and maintenance costs of the proposed 360MW CCGT is approximately seven times lower compared with the 360MW diesel solution. In the event that the plant had to operate on secondary fuel, the evaluated overall cost of the CCGT operating on ADO, and the diesel plant operating on HFO, would be similar at current ADO and HFO prices. This is based on the combined effect of plant efficiency, and the operating and maintenance costs of the two proposals.

The OUR agrees that the price of HFO has been lower than automotive diesel oil (ADO), according to historical and projected fuel oil prices. However, the intention is to diversify the fuel-supply mix. The first phase of this diversification is the use of natural gas to reduce Jamaica's heavy dependence on the more expensive fuel oil (both HFO and ADO). This will also serve to reduce the cost of electricity generation.

As regulators of the electricity sector, the OUR will not allow the plant to operate on the secondary fuel throughout its lifespan. Both the 360MW generation expansion project and the LNG project must work together to produce a sustainable energy solution for the country. The OUR is working closely with the LNG team to ensure that the optimal solution is obtained for Jamaica.

Michael A. Bryce is director - consumer and public affairs, OUR. Email feedback to columns@gleanerjm.com and mbryce@our.org.jm.