Boys caught in the nick of time 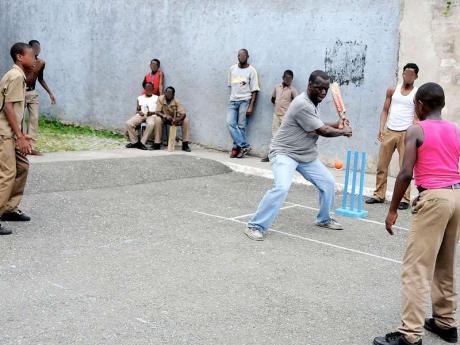 Carl Duncan of the St Andrew Care Centre playing a game of cricket with some of the at-risk boys who attend the institution. - Photos by Gladstone Taylor/Photographer 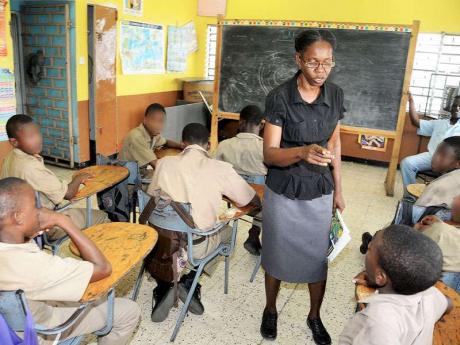 Leonie Sullivan (teacher) in class with her students at the St Andrew Care Centre for at-risk boys.
1
2

They were quite absorbed in their game of cricket. The relief of being off the streets 'hustling for a food' and away from their normal environment was evident. The safe haven offered by the St Andrew Care Centre for Boys is a refreshing stop for these youths.

"Lick him fi six!" yelled another.

The desolation of their daily situation was a distant memory during that moment in the yard of the Ambrook Lane centre in St Andrew last Thursday, as a light drizzle cooled the afternoon heat.

Their game of cricket was all that mattered.

For the past 11 years, the St Andrew Parish Church outreach centre has been a sanctuary for these at-risk boys who have found themselves on the streets in need of food, clothing, education, guidance, counselling, love, hope, and a future.

Boys as young as six years old who ran away from home, or as old as 20 years with nowhere to go, turn up at the outreach centre.

Some were expelled from school and turned to the streets, some refuse to go home for a number of reasons.

"It is very helpful for boys like me and my friend who get kick from school and don't have anywhere to go," shared John, one of the 16 boys now enrolled in the programme.

"With here you have no pressure, you get time to do your work," stated Mark, an auto mechanic in the making.

They have all benefited from the nurturing, rehabilitation and reintegration efforts of the programme the centre offers from 9 a.m.-2 p.m. on weekdays.

The aim is to empower them with the essential social, emotional and educational tools to create a better future for themselves.

With the assistance of several individuals and organisations like the Possibility Programme, Jamaica Social Investment Fund, Lions Club, Environmental Foundation of Jamaica, UNICEF, American Friends of Jamaica, and Food For The Poor, the centre is able to offer the boys breakfast, lunch, bus fare, clothing, remedial education, counselling and intervention, and psychological needs.

Each weekday, the boys stream in for breakfast at 7:30 a.m., before beginning the daily curriculum run by administrative manager Norma Rhoden and the staff of a teacher, social worker, counsellor, and auxiliary workers.

Leonie Sullivan has been there from the inception. The only teacher at the centre, she has dedicated her life to giving those boys a second chance.

Going beyond the call of duty has become the norm for Sullivan, often going off in search of the boys' parents or a boy who has gone missing, or trying to get their birth certificates in order for them to move to the next level of their lives.

"We are not just workers, we have to be teachers, mothers, fathers, referees, nurses, doctors, counsellors, you name it, because they all come to us with one need or another and we have to accommodate those needs," Sullivan told The Sunday Gleaner.

Over the years, hundreds of boys have passed through the centre, several of them grateful for being given the opportunity to make something of their lives.

Sharing their thoughts with The Sunday Gleaner, the boys - aged 12 to 15 years - all have aspirations to make something of their lives, all hoping to do well in the Grade Nine Achievement Test they are preparing to sit on Friday.

"I can recommend anyone to come here. The teachers spend time with us, they teach us ground rules, social graces, how to be better boys and a lot of things we need to learn," Kevindeclared, himself looking to go in the field of construction.

"We learn how to work as a team," said Tom, an aspiring singer.

The care centre also hosts parenting seminars and provides support services for parents and guardians of the children enrolled in the programme.

But even with the best intentions and purest of hearts, the challenges that the programme poses can be discouraging. Outside of the low literacy and numeracy level of many of the boys, the biggest challenge is their antisocial behaviour.

In fact, over the years there has been a high staff turnover, many unwilling to endure the often rude, disrespectful, violent, dishonest, boisterous behaviour of some of the boys.

"It is one thing to deal with the low literacy level and trying to get them to understand just the basics, but when they are very rude and disrespectful, and stealing other people's things, it can really get to you," Sullivan said.

"Each year, you have to wonder if this set will be better or worse than the one before."

Sullivan also finds it problematical having to teach boys of all ages and academic levels together in the sole classroom.

"Some of the boys find it very embarrassing, especially if you have older ones who are unable to read. When they see that the younger ones are reading and they can't, they become embarrassed, angry and frustrated and don't want to participate.

"Sometimes I am forced to do one-on-one sessions. In fact, many of them require a hands-on approach," she said.

According to Sullivan: "Children with low literacy levels always have behavioural problems because it is their way of detracting from it, seeking help or to get attention."

Hoping that each boy will maximise on his potential, the care centre team works hard at getting them to the next level and placed in the formal school system. For the older ones, they are placed in skills-training and employment centres.

"I refuse to give up on one single boy, no matter the challenge," she declared.

"Yes, I felt like giving up so many, many times, but I keep getting attached to the boys, and once you form that bond, it is hard to break. But believe me, it is very taxing and you can get easily worn out."

She continued, "I keep going because I often wonder, if I leave, will the person replacing me show the same care and concern? Will they put out the same effort and go the extra mile? I know this is my calling, it is my passion."

Sullivan is heartened by the many boys who were able to turn their lives around because of the work they do at the care centre.

Many have gone on to further their studies and pursue careers. Some have returned to express their gratitude.

"I know this is a wonderful, effective, essential programme, despite the challenges. Even though I have seen some that make me wonder, I have seen many, many turn their lives around and made me proud," she shared.

Names changed to protect their identities.