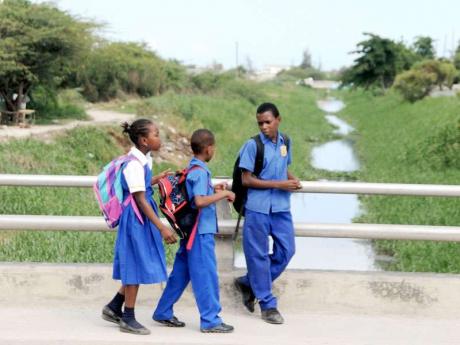 Students of Bridgeport Primary School walk on a bridge to cross the foul-smelling canal that is polluting the air around the area. - Gladstone Taylor/Photographer 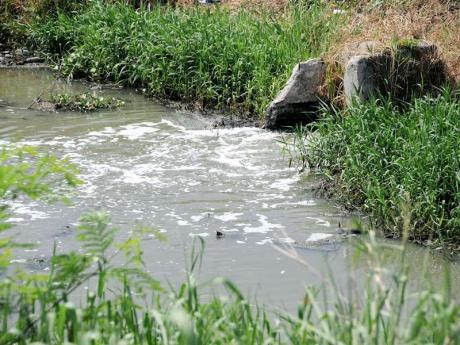 It is remarkable how the young minds of Bridgeport Primary in Portmore, St Catherine, are able to function daily, given the stench they have to endure.

One of three schools in the community, with Bridgeport Basic School and Bridgeport High being the others, the young charges are subject to the stink from a nearby canal and a National Water Commission (NWC) sewage plant that lies immediately in front of the school.

Germaine Road is the only buffer between the 33-year-old school, which has a population of 1,077 students between the ages of six and 12, and the sewage plant, which is one of five similar facilities the NWC has in Portmore.

The school's principal, Lorna Lewis, refused to comment on the issue, citing directives from the Ministry of Education.

Last year, the Lewis-led school achieved a 60 per cent mastery in the Grade Four Literacy Test, with 33 per cent of the students achieving near mastery and only seven per cent non-mastery.

But despite this strong performance in testing conditions, Lewis refused to speak, telling our news team that the ministry prohibits school administrators from speaking to the media on certain matters.

But that did not stop persons close to the school from speaking.

'I blame the Government'

"They should have realised that the stench would have affected the school," added the official who asked that her name be withheld.

A Bridgeport resident, Carol Masson, who has lived in the area for five years and has a pair of twin girls attending the school, was livid.

"The cesspool is very stink. I think it should be removed, because you have the kids inhaling all those bad odours and having their lunch with the smell around," argued Masson.

"I think they built the school at the wrong place, because the mosquitoes and the odour attack the students daily," added Masson.

The Sunday Gleaner team struggled to breathe during the visit to the school last week. The stench was unbearable, even when the team retreated to the vehicle and closed all the windows.

"They have to do something about this condition or, sooner or later, an epidemic is going to break out, especially among the kids," said Carol Osborn, who has lived in the community for more than 30 years.

"We have a citizens' association, but everything seems to have fallen on deaf ears. Everything runs on a political basis, but this is human beings we are dealing with. This is a health hazard and if they don't do anything, a lot of people going to die off, especially the kids," he added.

NWC's corporate public relations manager, Charles Buchanan, conceded that the company has a problem with the Bridgeport sewage plant.

He said the plant is unable to manage the volume of waste that is flowing into it. But Buchanan stated that plans are in place to remedy the situation.

"The Bridgeport sewage-treatment plant is old and is overloaded. The volume of discharge, legally and otherwise, coming to the plant is more than the plant can properly handle," Buchanan disclosed.

"We have a programme under the Kingston sewage development programme and, in particular, the Portmore component, where we are proposing that the Bridgeport sewage plant, as well as the four others in Portmore, be upgraded and converted into sewage-pumping stations.

"That would take the sewage generated in those homes and businesses in Portmore to the Soapberry sewage-treatment plant elsewhere in the parish, which is a new facility and has a greater capacity," he added.

While that is good news for the residents, Simeon Vernon, whose seven-year-old son attends the school, identified some additional concerns he has relating to the safety of the children.

"It don't seem as if the authorities understand the cries of us as the citizens of the area, because the other day when the councillors were walking around, we asked them if they can chop out the bushes that are beside the school, because you have girls over there and there are perverts around, and nothing has been done," declared Vernon.

"There are also crocodiles in the canal and there is a school right beside it.

"If you come in the evenings between 4:30 and 5:30, there are a lot of john crows behind the school, beside the canal bank, and when it is break time, you see the kids running up and down there. Is the kids make me know that john crows don't do people anything."