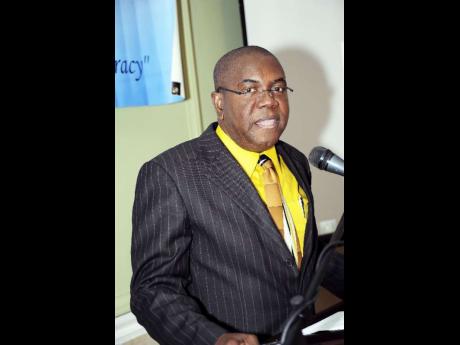 To mark World Press Freedom Day, the Press Association of Jamaica (PAJ), the Media Association of Jamaica and UNESCO Caribbean launched the PAJ's Hall of Fame and hosted a forum under the theme, 'New Voices: Media Freedom Helping to Transform Societies'. Veteran broadcast journalist and managing director of Nationwide News Network, Cliff Hughes, was among the presenters. This is an edited version of his presentation.

In the past year, we all have been encouraged by the unprecedented global socio-political democratic developments in which various media played an important role.

Indeed, many factors came into play with the events taking place particularly in the Arab states, including underlying economic woes and political suppression.

This elicited mass organisation, especially by the younger generations.

However, we cannot deny the fact that the freedom to harness the power of information and communication technologies, and especially those of new media, played a significant role.

This has reaffirmed what the World Press Freedom Day had been defending for the past 20 years. Media freedom is part of the package of fundamental rights for which people will strive.

The World Press Freedom Day was jointly established in 1991 by UNESCO and the United Nations Department of Public Information, which emphasises the idea that press freedom should be understood as necessitating pluralism and independence for the mass media at large.

The confluence of press freedom and freedom of expression, through various traditional and new media, has given rise to an unprecedented level of media freedom.

It is helping to enable civil society, young people and communities to bring about massive social and political transformations.

Media freedom entails the right of any person to freedom of opinion and expression on a public basis.

Critically, this includes freedom to hold opinions without interference and to seek, receive and impart information and ideas through any media, regardless of boundaries (Article 19 - Universal Declaration of Human Rights).

Recent uprisings in Arab states have highlighted the power of media and the human quest for media freedom, as well as underlining the fact that social inequality will indefinitely search for equilibrium.

Could the Arab Spring have taken place without the proliferation of social media or satellite television?

Information and communication technologies like text messaging and social media have enabled the diffusion of vital information to reach the widest number of people in a very short span of time.

Social media have enabled protesters to self-organise and attract young people in the fight to be able to freely express themselves and the aspirations of their wider communities.

Here in Jamaica, what are we seeing? Thirty-eight per cent of Jamaicans use the Internet at least once each day.

This, according to an islandwide survey conducted by Professor Hopeton Dunn of the Mona School of Business' Telecommunications Policy Management Programme between November 2010 and January 2011.

The study surveyed 2,200 Jamaican households and individuals. Almost 16 per cent of the respondents had access to the Internet at home.

This is not to be confused with the finding that only 24 per cent of the Jamaican population has access to a computer at home.

However, the troubling story behind Dunn's findings lies not only in the relatively low levels of Internet penetration, but in the pattern of use of arguably the greatest invention for centuries.

The most popular uses of the Internet were for sending and receiving email, which 77 per cent reported doing in the past 12 months.

Use on social networks was the second most popular activity, with 72 per cent of respondents reporting using websites such as Facebook and Twitter.

Educational use was third with 65 per cent.

The troubling aspect is how few Jamaicans are using the Internet to transact business and increase productivity and efficiencies. Indeed, the Global Information Technology Report of 2010-2011 noted a decline in Internet penetration and usage for productive enterprise in Jamaica.

It ranked Jamaica 73 in the world. That ranking places us among the top 10 worst countries as it relates to access and use of the Internet for business transactions.

This reality should challenge us as a country and media fraternity to increase awareness of the enormous business opportunities there are on the Internet.

This is a low-hanging fruit that we should quickly exploit to help turn around our struggling households.

We have a young and receptive population who should be encouraged to look to the Internet to create jobs and exploit income-generating opportunities.

If we could utilise the plethora of new media platforms and distribution channels to empower our vast army of young people to become independent income earners, that would be transformational. It is not beyond us.

Globally, as of April 2012, Facebook had more than 900 million active users, 600,000 of whom are Jamaicans living in Jamaica. In the wider Caribbean, there are 6.3 million 'Facebookers'.

Smartphones are also radically changing how we communicate and socialise.

This new-found media freedom is promising to transform societies in ways perhaps unimaginable only a couple of years ago.

It has enabled the emergence of new ways to communicate, to share information and knowledge, market to global audiences goods and services, and for people to widen their sense of participation, identity and belonging.

It has brought down borders. It has made redundant brick and mortar and reduced the need for huge capital outlay to get started in business.

And a social upside, it has freed up many of us to work from home and better balance the demands of parenting and earning a buck.

Media freedom, including online freedom, also plays a dynamic role in the economic transformation of society.

Indeed, it is an incentive for foreign companies and private investments. Companies are much more disposed to have long-term business interest in countries where media freedom is respected. It is necessary to ensure the transparency of public information so as to curb corruption.

Yet, media freedom is fragile, and it is also not yet within the reach of everyone. While the enabling environment for true media freedom is improving, the harsh reality is that many in the world still do not have access to basic communication technology.

Furthermore, as more reporting is transmitted online, more and more online journalists are being harassed for their work. For this, UNESCO has dedicated a web page, UNESCO Remembers Assassinated Journalists, to remember those who have perished in their efforts.

I note that the Broadcasting Commission is signalling that it wants legislation to give it the power to regulate the Internet in Jamaica. I urge caution.

We, as a fraternity, must be very wary and vigilant about the objectives here and the instinct by some to overreach.

Years of suppression, censorship and restriction have now been replaced by the convergence of social media, mobile connections and satellite TV. Media freedom has amplified and multiplied each individual voice.

As media freedom grows, the strength of the new voices grows, and their calls for social transformation and positive political change have become an unstoppable force.

The content of this speech draws heavily on the Concept Paper produced by UNESCO to mark World Press Freedom Day 2012. The contents of the entire concept paper can be found on the website of UNESCO.