STOP IT! - NRSC calls for electronic monitoring of traffic signals 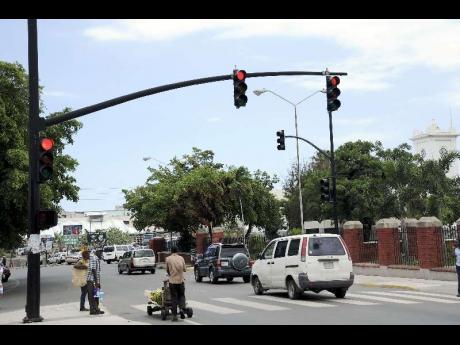 A motorist goes through the red light as pedestrians wait to cross at the intersection of Church and East Queen streets in Kingston. - Norman Grindley/Chief Photographer

Even basic-school students know that red means stop and green means go, but many local motorists either didn't learn that lesson or they have forgotten.

Almost daily, motorists are seen going through the red light at the intersection of East and North streets in downtown Kingston and it is the same across the island.

In the past two years, there has been at least four major accidents at the East Street and North Street intersection, resulting in at least two fatalities and in every case, failing to stop when the light is on red was a factor.

Across the island, this traffic breach has resulted in numerous crashes and many fatalities.

To curb the penchant of some motorists to disobey the traffic lights, executive director of the National Road Safety Council (NRSC), Paula Fletcher, is calling for an electronic system that automatically generates a ticket after a motorist goes through on red.

The ticket would be sent to the person's mailing address.

"That's the only way to go, and to move road safety to the next level, we need to use technology," she said.

Fletcher believes the need for electronic surveillance is impatient of debate.

"Speeding and running the red light are two of the major reasons for the need to have electronic surveillance. We need to treat it as a matter of urgency because lives are at risk," she cautioned.

This is not the first time that Fletcher has called for the use of technology to aid in combating traffic offences that often end in serious injuries or deaths.

In July 2009, she called for surveillance cameras that would not only be used to catch those who break the stop light but also motorists who speed.

Senior Superintendent of Police and head of the Jamaica Constabulary Force's Traffic Division, Radcliffe Lewis, agreed that the electronic surveillance system is the best way to go.

But Lewis warned that the venture might be too expensive at this time.

"Right now, because of the economic crisis facing the country, (the Government) is not in a position to do that even though it would assist us in our crime-fighting efforts as well. The country is just not in a position to entertain a venture that cost that amount of money," said the straight-talking senior policeman.

According to Lewis, it would cost the country in excess of US$50 million to equip all the stoplights across the island with the necessary surveillance apparatus.

Lewis said that if the traffic lights in the Corporate Area alone were to be equipped, the Government would have to find some US$35 million.

In addition to the cost, there is also a legislative hurdle to cross if the electronic surveillance suggestion is to become a reality.

"The law needs to be amended to make provision for electronic surveillance where you can issue a ticket electronically and then mail it out to the person's address.

"Once it is sent to the address (previously provided) it would be deemed as served and that would take the onus off the State," said Fletcher.

She added that the NRSC leads a committee that consists of representatives of the police force and the ministries of national security and transport and works.

This committee is mandated to examine the policy and legislative framework that would be required for the implementation of the surveillance cameras geared towards improving the prosecution of traffic offences.

Lewis reiterated that running the red light is a very serious traffic offence that attracts six demerit points and one that is not taken lightly by the magistrates presiding over the traffic courts.

"It causes a lot of accidents," said Lewis.

"Running the red light is more prevalent during the hours of 12 midnight to 5 a.m. Some people are caught and some are not caught," added Lewis.