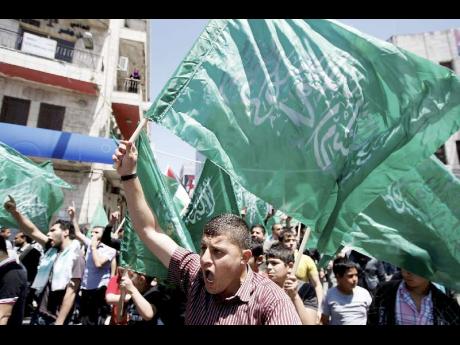 Palestinians wave Hamas flags during a support rally for Palestinian prisoners on hunger strike, in the West Bank city of Ramallah, yesterday.- AP

The 10 men are among 1,500 to 2,500 Palestinian prisoners on hunger strike to demand better conditions and an end to detention without trial.

Although Israeli officials and Palestinians give different numbers of hunger strikers, it is still one of the largest prison protests in years.

It involves a quarter to a half of all Palestinians held in Israeli jails, estimated at some 4,600 people.

The reasons for their detentions range from throwing stones to killing civilians in brutal militant attacks.

Most them began refusing food 19 days ago, but a smaller core have been striking longer, from periods of time ranging from 40 to almost 70 days.

Prison spokeswoman Sivan Weizeman said the 10 were transferred to a prison clinic for medical supervision. Weizeman did not say when they were transferred or what medical treatment they are currently receiving.

Sahar Francis of Addameer, a Palestinian prisoner-rights group, said the men were moved at different times last week. She said the men under medical supervision were those who had been on hunger strike the longest.

The prisoners' chief demands are a halt to imprisonment without charges for periods ranging from months to years, in a system called 'administrative detention'.

They are also demanding an end to solitary confinement, and the reinstating of family visits from Gaza. They also have smaller demands, such as being allowed to take a photo with their families once a year, instead of just once during their prison term.

Israeli officials say they use administrative detention to hold Palestinians who pose an immediate threat to the country's security. They say they keep the evidence secret from lawyers and the accused, because it would expose their intelligence-gathering networks if it were released.

So far, Israeli prison authorities have responded by isolating the hunger strikers, denying them family visits and engaging with those prisoners who are not on strike.