Love Doc is in the house 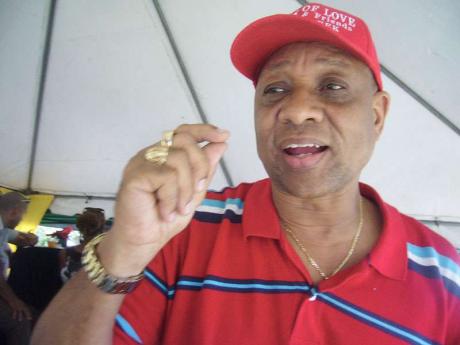 Dr Dennis 'Love Doc' Grant, as he speaks with The Gleaner on love, marriage and sex recently. - Photo by Paul Williams

They call him the 'Love Doc', he who not only embraces and indulges in the beauty and pleasures of sex, but also makes a living preaching and teaching it. And at age 61, he has no plan to slow down anytime soon.

But this married father of seven is not just an ordinary lascivious, hot-blooded, Jamaica-born man from Richmond, St Mary. As a matter of fact, he said the typical Jamaican man still doesn't know how to treat a woman.

Well, this chivalrous Jamaican is the Reverend Dennis G. Grant, who has a master's in philosophy, and a PhD in Christian counselling, and is the founding pastor of A Place of Restoration, a non-denominational church in Margate, Florida, USA. And in the United States, listeners tuned in to his three-year-old, two-hour radio show on Saturdays to hear his open-minded and frank discussions on love, marriage, sex and relationships.

He has a huge listenership, but many detractors, 'self-righteous believers', who can't fathom why this goodly reverend is so obsessed, perhaps, with sex. Yet, Dr Grant is not for a moment perturbed, for even from a pastor's standpoint he believes sex is healing.

"When you get involved in sexual activities, and you are in love, it is one of the best healing for the mind, soul, and body," he preached. And he's not without support, he said. He has God in his corner.

"Why is it God created sex if sex is so bad and dirty?" the Trench Town Comprehensive High School and College of Arts, Science and Technology graduate instructed.

Sex, he said, is even more fulfilling when you are in love and enjoying romance, which should be concretised by marriage. "I don't believe that people should be living together without concretising that relationship which, again, is of God," he said.

And to the all those who might oppose this radical perspective on sex from a God-fearing man who grew up in the Church, Dr Grant is not letting up. "Sex is good, created by God ... . It must be taught about, it must be practised, and it must be done the right way ... ," the counsellor of 15 years said.

Much of the seemingly negative attitude towards the discussions and glorification of sex is borne out of hypocrisy and pretentions, he said, both of which walk on two legs in the churches.

"We have more hypocrites in the Church, and as church leaders, more than what we have in the world, and that's a fact," Dr Grant declared, "because there are pastors, church leaders, and Christians in camouflage, and they will pretend. They are one thing on the outside, but on the inside, they are something different ... . That's hypocrisy!"

The realm of hypocrisy is not for him to linger in, as he said he lives life to the fullest, and practises what he preaches. His wife of 25 years is quite supportive, and urges him to tell it as it is. But Dr Grant is not just about sex, sex, and more sex. This multifaceted man also has community service and philanthropy etched in his bones.

"I am one of those persons who believe I should reach out and help others, especially those who are less fortunate ... . Being a community activist drives me most," he said.

He's the founder and executive director of the Juvenile Restoration Council, a crisis intervention and comprehensive counselling programme for at-risk youths and their fractured families, immigrants' right advocate, a member of the Jamaican diaspora in South Florida, founder and president of the Pastors Guild of America, among many other things. His involvement and his fame have landed him on major American television networks and in news publications.

The Love Doc has many publications, including Staying on Top of Credit; Lasting Romance: The Missing Link; and Love, Romance, Marriage and Sex - Getting it Right!, which he was in Jamaica promoting recently.