The Pegasus is in! 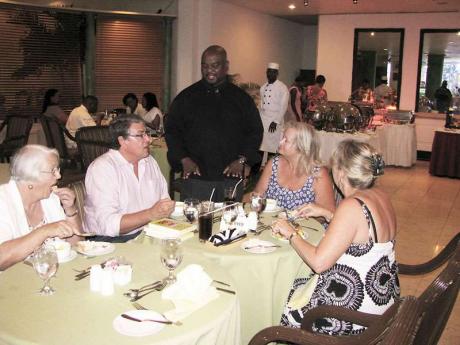 Executive chef Mark Cole (standing) ensures that everything is OK for guests at The Jamaica Pegasus Sunday brunch. - Contributed photos 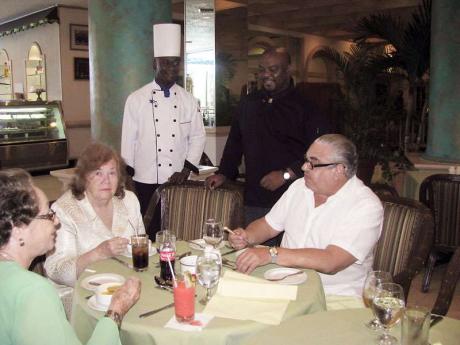 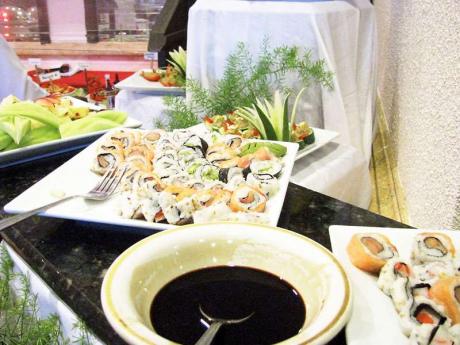 Some of the delightful offerings at The Pegasus hotel's Sunday brunch.
1
2
3

Once upon a time, The Jamaica Pegasus hotel, located along Knutsford Boulevard, was regarded as an iconic social landmark. It was the preferred hotel for the international traveller, who was stopping over in the nation's capital. It was also the preferred social haunt of the leading social denizens, business tycoons, fashionistas and, of course, social profilers!

Its former managers, through a campaign that included shrewd marketing and positioning, along with some superb food and beverage offerings, and hosting and staging of some preferred events, the hotel became one of the most recognised properties not just in Kingston, but across the region.

Since those times, the hotel has seen and undergone many changes in management structure and ownership. And while it has managed to maintain its primacy as the city's leading hotel, this position has been challenged, and has seen the hotel losing some of its sheen.

However, with the advent of Nancy McLean, and her skills and training in hospitality and theatre, the hotel was able to - if not necessarily stave of those challenges - certainly hold its competitive own in a rapidly changing landscape.

Well, since the days of the Trust House Forte management and the many changes since then, The Jamaica Pegasus hotel has once again changed hands. It is currently owned by the illustrious Hendrickson family, known and celebrated for their domination of the island's bake products. The Hendricksons have been quietly emerging as a tour de force in the hotel industry. Their portfolio, which started with their acquisition of a number of north-coast properties, expanded to be the single largest owner of hotel rooms in Kingston, which now includes The Jamaica Pegasus hotel.

Well, my dears, with new ownership, naturally, there's a new direction. And naturally, any new direction would include a revamping of the hotel's image, particularly in the area where it was once unchallenged - food and beverage! And so, enters Mark Cole, executive chef, charged with the responsibility of recasting the menu of the hotel.

Well, my dears, if the new owners were looking for a culinary guru to revamp and relaunch its dominance as a culinary tour de force, they could not have made a better choice. Cole comes to the table more than qualified to spearhead that task. He has served as the executive chef of sister properties Breezes Runaway Bay and Hedonism III also in Runaway Bay, St Ann. Both properties boast a number of speciality restaurants, including Japanese, Italian, Jamaican, major dining rooms and a number of beach and pool grills/eateries. He was trained at the Culinary Institute of America in New York, so you know we are talking about someone at the top of his game here!

It is with this background that the St Mary native took to his new task of fashioning The Pegasus hotel's new culinary course.

Well, my dears, suffice to say that in the almost six months since Cole has taken over the culinary reins of the hotel, the reviews have been positive and then some!

Now, the hotel has long been celebrated for its Sunday brunch. A signature culinary showpiece over the years with a reputation for value for money, as a place to dine and be seen, as well as its fashionable overtures, it has developed a following like no other. It offers a cosmopolitan melt of Jamaican speciality dishes and an international offering, making it not only the preferred outing for families, friends or the lone diner on a Sunday. The event has been patterned, copied really, by many other establishment across the city, which have used the success of The Pegasus' Sunday brunch to launch similar events.

It can be said that The Pegasus hotel, particularly its Sunday brunch, is once again becoming the talk of the town. Cole and his cadre of staff have not only been repositioning the hotel as a centre of culinary showpiece and excellence, but once again as a fashionable place to dine!

And luvs, speaking of fashionable, we are talking a fabulous combination here of fine food and celebrated society and nothing but. Luvs, a few Sundays ago, it was definitely a case of families and friends. Out was the venerable Peggy Blades and friends. Her party included her daughter Susan Scott; the celebrated Robert MacMillan; Jeanne Watson; the eminent Donovan and Andrea Lewis, and their son; Kingsley Cooper and companion, the fabulous Romae Gordon. The charming Marilyn Bennett was also out with her party; plus a number of others.

And dears, Sunday brunch is not the only fab thing happening at The Jamaica Pegasus either. On Mondays, the oxtail is to die for. Among those spotted at what has been fashionably dubbed Ox-Tales brunch, are the fashionable Issa twins - the fab Zein Issa Nakash and her sibling the lovely Muna Issa - and their party of friends, including the lovely Julianne Lee Samuels, Robert Stephenson and Lisa Lewis, plus a number of others!

Dears, it's safe to say that the signs are, like Flynn, The Pegasus is fashionably in!