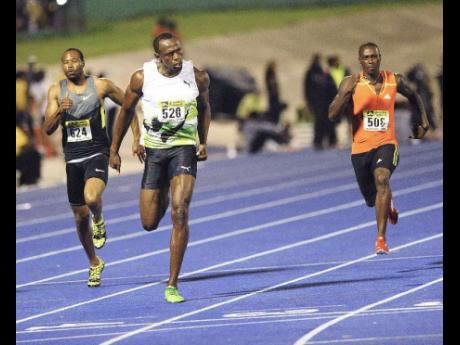 Competing before a capacity crowd at the country's premier sports venue, both clocked world-leading times in the men's and women's 100 metres, respectively.

Bolt had the crowd cheering wildly after he breezed to the line in 9.82 seconds, finishing ahead of Michael Frater (10.00) and Commonwealth and Pan Am Games champion Lerone Clarke (10.03). The race had earlier been held up by two false starts.

The 2008 Olympic champion was elated with his display.

"This is a good start for me as I was not able to compete last time and to come and give the crowd a nice treat ... , I am happy. I am looking forward to the remainder of the season with great hope," Bolt said.

In the women's event, Jeter showed supreme speed and confidence in crossing the line in 10.81 seconds, beating the 10.86 meet record she set last year.

Olympic 400-metre hurdles champion Melaine Walker had a successful start to the season in her pet event, winning in 55.29 seconds.

Walker took control of the race from very early and cruised home ahead of American Tiffany Williams (55.80) and fellow Jamaican Ristananna Tracy (56.62).

"I am happy to come out and win tonight as it is always good to win at home. I am not too happy with the time, but the good thing is that I was able to finish the event injury-free," a satisfied Walker said after her event.

World leader in the men's 400-metre hurdles, American Bershawn Jackson, competing for the first time locally as a senior, showed his class in the event by racing to an impressive 48.73 seconds, beating Trinidad and Tobago's Jehue Gordon (48.98). Defending champion Justin Gaymon of the United States was third in 49.08.

"The atmosphere in Jamaica is always great, and it reminded me of when I competed here at the World Junior Championships in 2002," said Jackson.

The meet started off on an excellent note. Former Vere Technical standout Kimberly Williams delighted the large crowd with a personal best of 14.33 metres to take the women's triple jump. The distance is an Olympic 'A' standard. Trinidad and Tobago's Ayana Alexander (13.69m) and American Whitney Liehr (13.18m) finished second and third, respectively.