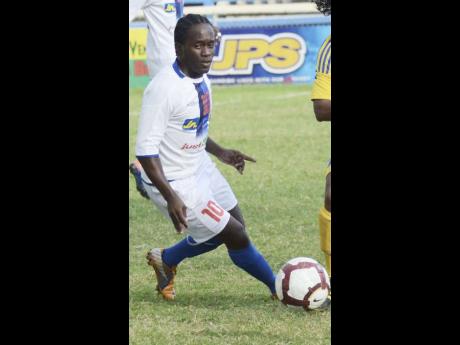 Alanzo Adlam .... will be a key man for Portmore today. - File

All the odds are stacked against Boys' Town on this the final day of competition in the Red Stripe Premier League in what is expected to be an exciting day.

To win the title, the 'Red Brigade' need to win their game against Humble Lion, then hope for a Waterhouse victory over Portmore United and finish with a better goal difference than the current leaders. Portmore's goal difference stands at 11 to Boys' Town's seven, giving the leaders a four-goal advantage.

The simple-minded could hold the view that Humble Lion, who are coached by a former Boys' Town stalwart, Lenworth Hyde Sr, will give Boys' Town, the team which finished second to Tivoli Gardens last season, a break.

Loss could be upsetting

That view could be strengthened by the fact that Hyde left Portmore in less-than-favourable circumstances. With the teams having their pride, that is unlikely to happen, especially as Humble Lion were beaten at home by Harbour View last week. A second successive loss would not be pleasing to their fans and club chairman Mike Henry.

In a bid to have a level playing field for today's matches, all games will start at 3:30 p.m.

With his team sitting on 66 points to Boys' Town's 63, Portmore United coach Calvin Lewis knows that their position is the preferred one.

"It is about lifting the trophy, and in order for us to do that, we need to play with confidence and maintain our concentration for the duration of the game. Once we do that, we should be in business," a very calm and confident Lewis said.

He said the coaching staff recognised certain weaknesses, which they worked on correcting.

"We were doing what we needed to do to strengthen ourselves and I think it will show tomorrow. I have no doubt we will win. I don't see us losing to them (Waterhouse). It doesn't matter who they take to play us, I don't see us losing," added Lewis, who said his team will be at full strength.

With that being the case, the performance of players such as Adrian Reid, captain Damian Williams, Eric Vernan, Alanzo Adlam and the Harriott brothers - Rosario and Rickardo - will be crucial. Waterhouse, on the other hand, will look to goalkeeper Richard McCallum; the competition's leading scorer, Jermaine Anderson; and their midfield general, Vincent Earle.

If Portmore United manage to get the single point that has eluded them for most of this half round, they will gain their fifth hold on the title, while their failure will gift Boys' Town their first title since 1988, an experience most of their players would have only heard about.