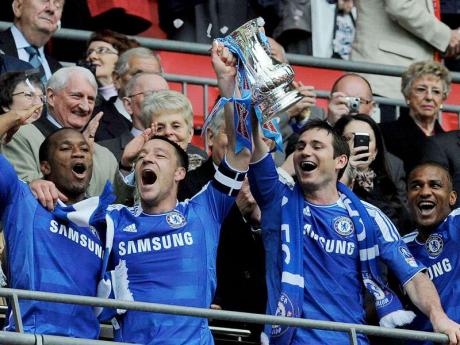 Chelsea won the FA Cup for the fourth time in six seasons, beating Liverpool 2-1 yesterday on a second-half goal by Didier Drogba.

Didier became the first player to score in four finals and helped the Blues survive a late onslaught by Liverpool in the 131st final.

Ramires put Chelsea in front after 11 minutes, capitalising on blunders by Liverpool. In the 52nd, Drogba scored his eighth goal in eight games at Wembley. He sent the ball through defender Martin Skrtel's legs and into the net after being fed by Frank Lampard.

"He is my hero," Lampard said. "No striker I have ever played with has scored so many important goals in finals."

Liverpool substitute Andy Carroll scored in the 64th minute after working his way around Chelsea captain John Terry. He thought he had the tying goal as well when his header was swatted away on the goal line via the crossbar by Petr Cech. The referee waved off Liverpool's appeals for a goal and replays failed to show the entire ball had crossed the line.

"He has been brilliant," Lampard said. "He has turned the club around."

Terry became the first captain to lift the FA Cup four times with the same club.

"It's fantastic, it's what we live for," Terry said. "At times people have slated us as too old, past it or not together, but as a team we come together and unite when our backs are against the wall, and we've done that superbly in the last 16 or 17 games."

For both Chelsea and Liverpool, the FA Cup provided a distraction from miserable Premier League seasons, with both teams out of the top-four Champions League qualification places.

"We've been heavily criticised this season and we've got the trophy and have the chance for another one," Di Matteo said. "It's been a difficult season but the players have made the club proud. It's been hard work but we came through it."

Meanwhile in the Premier League, Arsenal's grip on third place loosened yesterday when they were held to a 3-3 draw by Norwich.

Arsenal are looking to qualify for the Champions League and the loss came in Arsene Wenger's 900th match in charge of the London club.

Steve Morison scored in the 85th minute to secure the draw for Norwich. The outcome left Arsenal two points ahead of Tottenham and Newcastle - both play today. The point lifted Norwich to 13th place.