Something for the WI to think about 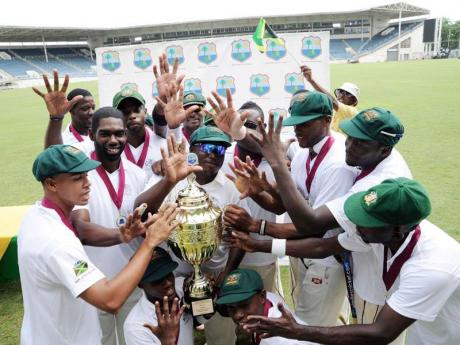 The truth, however, is that Barbados shared the title in 1976 with Trinidad and Tobago. Without having to share the title with another team any of the time, Jamaica boast a perfect record and have bragging rights over Barbados, even though they have to win it next year in order to stand alone as the proud holders of the record.

However, with a little luck for the Bajans and the people from the land of Garry Sobers, they could still be basking in the glory of being the one and only record holders because of a rule which makes the tournament a league and a knockout. This rule does not distinguish between a league and a knockout, and has almost made a mockery of the tournament.

A rule is a rule. A rule which is in place before a ball is bowled or a stroke is played is fair to all participants, and as the rule of the West Indies Cricket Board's tournament, it is fair and just to all concerned.

The rule states that the first half of the tournament involving the seven teams be played in a round-robin format, with points gained for each match. The rule also states, however, that the second half involving the top-four teams, based on points from the first half, compete for a place in the final based on a knockout format.

Rules apply across board

As stated earlier, nothing is wrong with that, for the simple reason that the teams know the rules they are playing under before the start of the tournament, and all the teams play under the same rules.

It is wrong, however, not only to have a league format and a knockout format in one tournament. It certainly seems wrong, when one team is so dominant, is so much better than the other teams, that if they do not win, the tournament seems a waste of time.

Only the gods saved the West Indies Board from embarrassment this time around.

In the tournament, each team played six matches in the preliminary round, and with Jamaica winning all their matches to finish with maximum 72 points, they had to play a semi-final match and a final match against teams which lost at least two matches and finished way below Jamaica on 46, 46, and 39 points each.

In other words, after marching through half of the tournament victoriously with maximum points, Jamaica could have lost the tournament by making one mistake, or by losing the toss on a bad pitch and being sent to bat.

There may be nothing with that. In fact, some may say that's how the cookie crumbles.

That, however, cannot be right. It cannot be fair. It was not so at the beginning, years ago, and on top of all that, the system is not good for development.

The West Indies Cricket Board and its cricket committee had better look into its four-day tournament and how it comes up with a winner.

Money, or the lack of it, may be the reason for the league/knockout format of the four-day tournament. But whatever it is, something has got to give. The money must be found to make it a league.

One thing is sure: the board cannot have another league/knockout format for its four-day tournament.