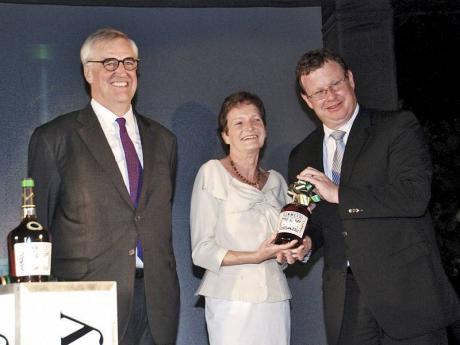 French Ambassador Her Excellency Ginette de Matha is presented with a gift of Hennessy cognac in the new Jamaica 50 Hennessy commemorative bottle. Doing the honours is Paul Henriques (right), managing director of J. Wray & Nephew, official distributors of Hennessy Cognac in Jamaica. Looking on is Maurice Hennessy, visiting heir and ambassador for the world-famous House of Hennessy, who had just unveiled the commemorative bottle at the French Embassy on April 30. - Contributed 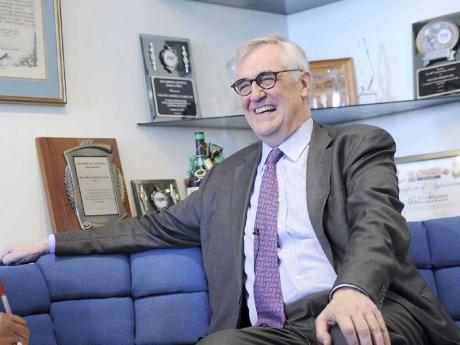 To the world, Maurice Hennessy is an eighth-generation descendant of Irishman Richard Hennessy, founder of Jas Hennessy of Cognac, named for the Cognac area of southwest France. Known as 'Mr Hennessy', he now serves in an ambassadorial role, touring the world to promote Hennessy's products and spread the company's values, conduct exclusive tastings of its cognacs, and serve as a media spokesperson.

On a visit to Jamaica last week, Hennessy brought a very impressive gift. It was a specially blended 24,000 Hennessy VS, in commemoration of Jamaica's 50th anniversary of Independence, and all 24,000 of this limited-edition cognac will be available only in Jamaica through J.Wray & Nephew Limited.

Mr Hennessy has reason to be proud. His company represents some of the world's coveted brands, a French multinational apparels and accessories company headquartered in Paris. It was formed after the 1987 merger of fashion house Louis Vuitton with Moët-Hennessy, after the 1971 merger between the champagne producer Moët & Chandon and Hennessy, the cognac manufacturer. It controls around 60 subsidiaries, each managing a small number of prestigious brands. The subsidiaries are often managed independently.

Mr Hennessy spoke exclusively with The Gleaner about his life with the 250-year-old company. With obvious pride in his family tradition, Mr Hennessy said they have the best stock of ageing cognac with vintages as old as the 1700s, some of which they use and some they sell. It is no wonder that the smooth-tasting cognac attracts some of the world's leading movie stars, business moguls and heads of state.

Asked how they achieved and maintain that standard, he said, "We have some great friends, and today, there are new ways to reach out to them - such as through Facebook. It is amazing to see people drinking Hennessy by the bottle."

That level of confidence has grown over the years from France to the world's top-10 consumers: the United States of America, China, Taiwan, Singapore, Russia, Ireland, the United Kingdom, Nigeria, Hong Kong and Vietnam.

So, how did it all start? Was the young Maurice Hennessy given an early introduction to the business like the children of similar family-owned entities? Apparently not. Hennessy told The Gleaner that he was neither forced nor coerced.

"My grandfather was my mentor; my father was a nuclear scientist, who wasn't interested in working for the company," he said, adding that said grandpa remained actively involved even after he retired.

However, he was once given a cube of sugar immersed in cognac, although that first taste has long been forgotten. Thanks to his grandfather's influence, he grew to like the idea of working at the company.

"But I really wanted to be a cattle farmer," Mr Hennessy said, noting that things changed when, in his mid-20s, he interned with a company that distributed for Hennessy and, from his travels at the time, he realised he was fascinated by the work, so he chose it for a career.

Mr Hennessy says that in the old days, mothers would rub a little cognac on the gums of teething children. And, during the United States prohibition years, "It was the only liquor legally available and it could be bought with a doctor's prescription!"

And yet, in spite of the tremendous history of the cognac, Mr Hennessy does not have a favourite. He takes the diplomatic high road, like a mother who insists she has no favourites among her children. His choice depends on the occasion and the company. "All cognacs are different. You have to take time to enjoy it. It's an expensive drink."

Hennessy sees a bright future for LVMH, although he cannot definitively say there is a particular descendant waiting in the wings to take control.

"We have excellent managers in place and they are doing a great job. My three daughters are doing their thing, and I have nephews who might be keen. Perhaps there are even grandchildren too," he said. But Hennessy loves his company dearly, saying that when you are the descendant of a great company, it's a pretty good start in your life and career. "But if they prefer to be brain surgeons, the world needs them too."

LVMH is here to stay. It is one of the dream companies in Europe.

"We are one of the companies that young business students in France dream of working with. So our future is safe. If there is no immediate family member to run it, we will always have young, bright people capable of running it."

Hennessy agrees that neat is the best way to savour the taste of Hennessy VS/VSOP, but adds that in Jamaica where it is so hot, it may be great as a long drink over ice.

And on the subject of ice, Hennessy who lists ice cubes made from non-chlorinated water among his top-10 favourite luxuries, says ice cubes made the old-fashioned way with pure water in ice trays are the best. He does not like cubes from the ice-making machines with chlorinated water, which he describes as having a "horrible taste". If Mr Hennessy can't have mineral or purified water, he takes his cognac with cranberry juice!

Another interesting item on that list is chicken from the market in the town of Cognac and raised on a farm close to his home. Why is this so, The Gleaner asked?

"When you buy a chicken, check its nails, he said. "If they are clean like the chicken just had a manicure, the meat is bad." Mr Hennessy believes that dirt under a chicken's nails means that the bird has dug and scratched the earth for its food; it has also walked about so its muscles are developed the normal way. Otherwise, he says, the meat tastes bad. Noting the current trend towards organically grown chicken, Mr Hennessy says he does not like too many laws governing what he eats, so he prefers naturally grown foods.

"If you feel happy and rich, have XO; if you feel really, really happy, have Paradis. Hennessy Cognac is always very well done, it depends on what you have in stock. I like it with coffee or a piece of chocolate after dinner."

CAPTION: French Ambassador Her Excellency Ginette de Matha is presented with a gift of Hennessy cognac in the new Jamaica 50 Hennessy commemorative bottle. Doing the honours is Paul Henriques (right), managing director of J. Wray & Nephew, official distributors of Hennessy Cognac in Jamaica. Looking on is Maurice Hennessy, visiting heir and ambassador for the world-famous House of Hennessy, who had just unveiled the commemorative bottle at the French Embassy on April 30. - Contributed