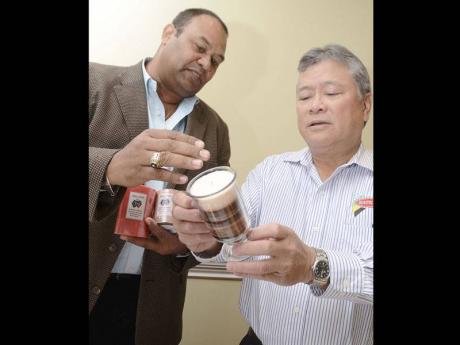 Andrew Chin-Hing (left), director of Pretti Slippery Ltd, shows off one of the products to Gary Hendrickson, chairman of Continental Baking Company. 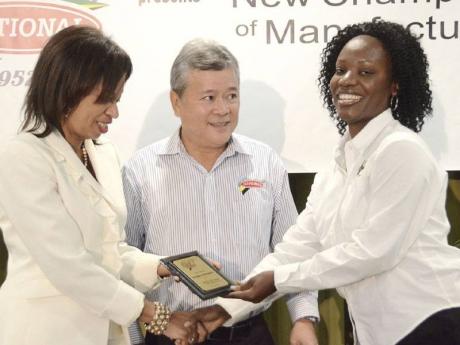 State Minister of Industry, Investment and Commerce Sharon Ffolkes-Abrahams (left) presents a Bold Ones for 2012 plaque to Heneka Watkis-Porter of Patwa Apparel. Looking on is Gary Hendrickson of Continental Baking Company. 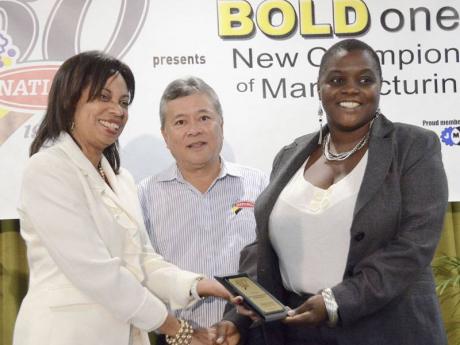 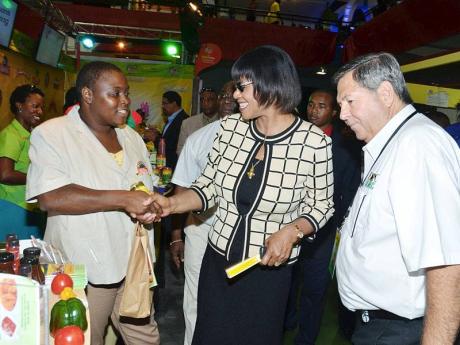 "Priceless", "golden opportunity", and "exceeded expectations". These were among the terms used to describe the benefits gained from taking part in the 2012 JMA-JEA Expo Jamaica, by the eight 'Bold Ones' hosted by Continental Baking Company (National bakery) in its pavilion.

The operators of the young companies have been overjoyed and enthusiastic in reflecting on the benefits of the programme, especially the extremely positive results they have had from participation in the Expo. They report significant orders, many of them confirmed, from distributors and others in Jamaica, around the Caribbean, in Canada, the United States and England. They also report being overwhelmed by the appreciation of the general public for their all-Jamaican products. And all express gratitude for the outstanding assistance from Continental Baking Company, without which they readily admit they would still be struggling to achieve current levels of success.

Cinderella Anderson, who operates Mango Valley Pride in St Mary, reports that her experience brought her substantial orders from 12 different companies, four of them from overseas. Her plantain flour, otaheiti raisins, otaheiti rumballs, and jerk seasonings were the products ordered. But it was seeing her deep rural operation streaming on video that moved her almost to tears, she says:

"When I looked at the running screen with Mango Valley Pride and its people and its products, I said, 'Oh my God, look at us now!' It was also the coming together of all the Jamaican companies that made those four days a great success," she adds, "I've never seen so many companies! What National bakery does for Bold Ones cannot be over-estimated!"

"I am appreciative of this golden opportunity provided by National; my brand has been further exposed not just to the local market but to buyers internationally, the press coverage and overall involvement in a first-class expo is more than I could possibly ask for.

"My contact database has also increased significantly; the buyers and suppliers directory is like a gold mine to me. Additionally, I was able to collect names and email addresses of hundreds of visitors."

Dr Angela Chin Hing, whose Montego Bay-based Pretti Slippery products feature a wide range of skin care and aesthetics, also found participation in the 2012 Expo "extremely beneficial". She adds: "We got great exposure and many persons were very interested in the Pretty Slippery products. Many local companies were interested and we will be sending them price lists. We also had interest shown by visitors from Cayman, Antigua and Trinidad."

Suzette Thomas, managing director of Sue Tru Caribbean Manufacturers and Distributors, based in Roselle, St Thomas, found the expo very helpful and points out, "We were able to get some bookings we would never have got otherwise. It was very, very good!"

Thomas reports her company confirmed four orders, and is in negotiations to confirm two more, including distributors in the United States, London, St Lucia and Jamaica. The products ordered were crushed pepper, pepper jelly, Irish moss and natural roots drink, while one of the local distributors has ordered the company's entire line!

"The experience, and the overall exposure have been priceless," declares Deborah Belcher, CEO of Debz Foods. "It's the greatest thing that has happened to me since I began the business. I am extremely grateful to National bakery's chairman and Bold Ones conceptualiser, Gary 'Butch' Hendrickson for his generosity. He is a wonderful person and he has certainly given Debz some great exposure."

Belcher says that her soy and other ice creams and sorbets caught the interest of many Jamaicans including hoteliers, and a number of others from the Caribbean. However, she notes that she wants to become better established in Jamaica before going international. She was happy to find a supplier of vanilla beans grown in Portland, and made valuable links with other companies who can enhance her business and its efficiency.

All these Bold Ones plan to use their videos and other promotional materials to maximise on their exposure at the Expo.

Cinderella Anderson will be taking her 'show' to neighbouring communities of Ocho Rios and Port Maria, as well as to her own Mango Valley citizens.

Angela Chin Hing will be posting her Pretti Slippery video on her website, as will Debora Belcher of Debz.

Patwa Apparel's Heneka Watkis-Porter is going to upload hers to YouTube and circulate it on Facebook - she has already incorporated her Bold Ones photos, advertorial and clippings into her company's portfolio.

Sue Tru's Suzette Thomas, meanwhile, wants to re-run her company's television and press ads in a follow-up campaign, to generate additional interest for her new brand.