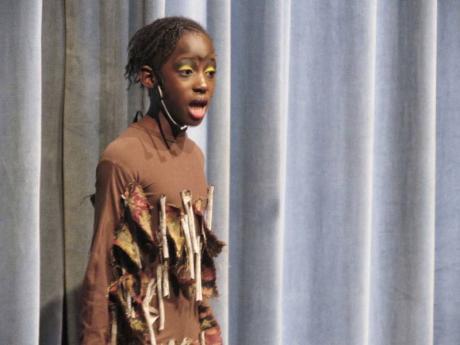 Patoo, the narrator of The GEM played by Eby Nelson, informs the audience at The Courtleigh Auditorium on Saturday night about what is to happen next. 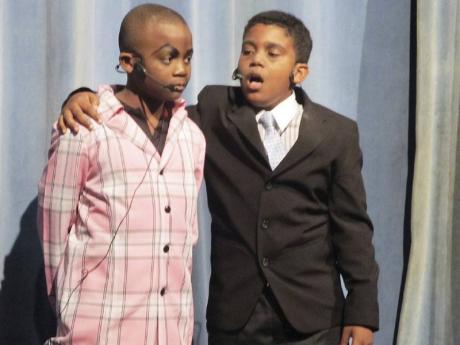 Bully, played by Jermaine Campbell (left) and the minister of government, Kyann Jagaroo, have a conversation. 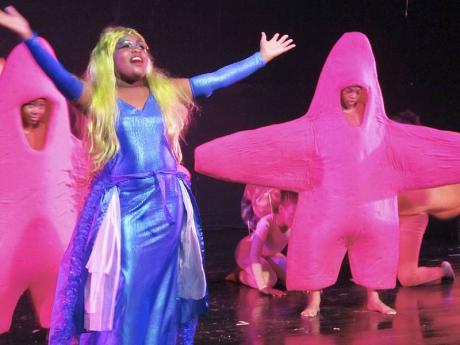 River Mumma, played by Kenneka Morris, shows off her riverbed during a scene from The GEM children's pantomime at the Courtleigh Auditorium on Saturday. - Photos by Marcia Rowe 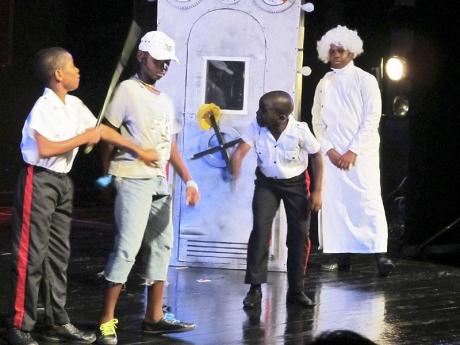 Jamaica has talent. The phrase is often used after sterling performances on the track or by some entertainer or the other. It is a phrase that must once again be repeated. This time, the saying is appropriate when used in relation to the cast of The GEM children's pantomime.

Guided by Craig McNally and Peter Abrikian, the cast of talented youngsters, ages four to 14, brought the Kerine Miller-penned script to life in a delightful way. With pure quality singing, simple but effective dance movements and witty, and appropriately delivered lines, the principal players were entertainingly funny.

Fiona is an uptown girl whose father is a minister of government (Kywann Jagaroo) and Chris is from a garrison community with his mother and three sisters. The paths of the two children cross in a time machine that scientist and creator Dr Beckford (Jared Reid) calls 'Jeep'.

Armed with a treasure map, the two are taken on a symbolic journey to discover who they are. Their first stop is Africa. Chris is welcome as King Abubbu. Both are met by Queen Practeesha (Dejani Allen). She gives them both medals and further instructions for their journey. Along the journey they find a pickaxe, a shovel and eventually a key. However, to find these tools their search takes them to River Woi. Here they battle River Mumma (Kenneka Morris) and her school of fish and crab. Moving on, they encounter similar obstacles. Each challenge is a test to strengthen weakness or correct their flawed character traits.

Their final stop on the machine is Chris's community. In the community, they find the key to open a chest supposedly filled with gems. But instead they make a profound discovery.

The language of Miller's somewhat lengthy script is decorated with current phrases from some of Jamaica's public figures and topical events. Her incorporation of the character Patoo (Eby Nelson), the narrator, and the guardian angels for Fiona and Chris along their journey also provide the presence of Jamaican tradition.

But the strength of the production is in the powerful message that the right attitude, belief in self and team effort are what make individuals better.

The opening night's mainly technical hiccups were easy to overlook due to some fine acting from Jermaine Campbell and his fellow cast members. Campbell was brilliant in expression and mannerism of the adult Mr Bully, who comes from an inner-city community and is an employee of the government minister.

Each of his mature lines was humorously executed.

Nelson (Dravid Reid) and Mahfood must be acknowledged for their good performances especially because they had to memorise as many lines as they did.

However, directors McNally and Abrikian may want to remind them to cover for their fellow cast members more. This will stop the tendency to indicate that someone has made an error in one way or the other.

Otherwise, the two directors moved their cast relatively well on the wide Courtleigh Auditorium stage. Their directing was nicely balanced by the beautiful spectacle from a dynamic set and some appropriate props. Credit for set goes to McNally and Miller.

Commendations must also go to Ruth Royes for getting such pure-sounding quality from the singers, especially Dravid. Chyann Lowe's choreography was practical for the wide age group.

The GEM, a children's pantomime, is a lovely child's month treat for the entire family. It will make you think not only on the strong message but also say, "Jamaica has talent".

The pantomime continues on weekends throughout May. Showtime is 7 p.m.