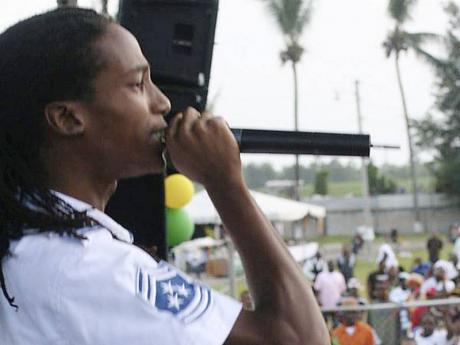 When Junior Reid was busy building his career back in the '80s and '90s, could he have had the slightest idea that the One Blood camp would have grown to be this big?

Reid, who is known for songs such as One Blood and Funny Man, as well as being the man who replaced Michael Rose as lead vocalist for Black Uhuru, has seen his One Blood musical family grow tremendously with the addition of his brother, Bomb A Drop; older sons, Andrew and Wada Blood; and now two younger sons Juju Blood and Yung JR.

Juju Blood, one of the latest additions, is aiming to leave a mark as prominent as that which was left by Junior Reid.

The young artiste, who described his genre of music as reggae/dancehall and hip hop, delivered with a singjay style, said he is extremely thankful to his father for the foundation he set.

"He has had a major impact on my career. I look up to him and I see the great works that him put in, because a nuff things him do but sometimes people don't acknowledge it. At the same time a my legend that, suh mi just love wah him do fi we. I want to be like him or be better than him," Juju Blood told The Gleaner.

He shared that with his brothers also in the business, it's sometimes feels like a family affair.

The group shares a strong musical relationship as Juju said that that they all have an input in each other's career in aspects such as songwriting and performance suggestions.

"We're here for each other, we support each other. Each man write dem own lyrics but wi can input, like telling that we don't really like this part or this part would better if yuh do it like this. Wi deh here to strength each other," he said.

After a recent performance at the Clarendon Music Awards, Juju Blood said he will soon be 'amping' up his local presence and fan base through good quality music.

"I love reggae music, dancehall music and will be surely increasing my presence locally so people can just look out for more from Juju Blood, the whole One Blood family and Money Green Productions. We a put it pon a different level," he said.

Juju Blood recently released a video for Come My Way on the Overproof rhythm and is busy promoting songs such as We Run The Streets on JR Productions' Monkey Money rhythm.He is currently working with producers such as JR Productions, Tuff Chin, Phoenix Dynasty, Out Deh Records and Fams House.