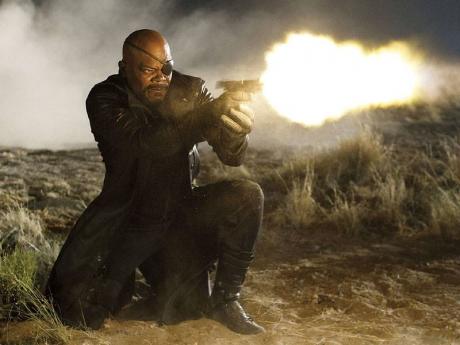 In this film image released by Disney, Samuel L. Jackson portrays Nick Fury in a scene from Marvel's 'The Avengers.' 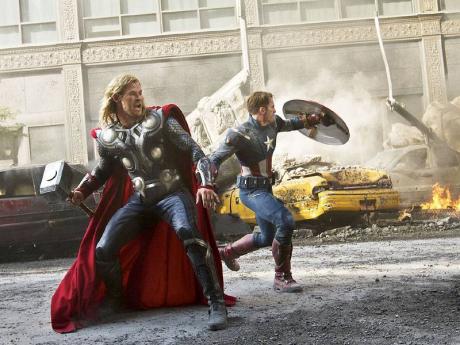 In this film image released by Disney, Chris Hemsworth portrays Thor (left) and Chris Evans portrays Captain America in a scene from 'The Avengers.' - Ap Photos
1
2

Hulk, smash. That's what Captain America tells the Incredible Hulk to do in The Avengers, and that's what the Marvel Comics superhero mash-up did at the box office, smashing the domestic revenue record with a US$200.3-million debut.

It's by far the biggest opening ever, shooting past the previous record of US$169.2 million for the debut of last year's Harry Potter finale.

The Avengers added US$151.5 million overseas over the weekend to bring its total to US$441.5 million since it began opening internationally a week earlier.

That raised the film's worldwide haul to US$641.8 million in barely a week and a half, more than its Marvel superhero forerunners Iron Man, Iron Man 2, Thor and Captain America took in during their entire runs.

If distributor Disney's domestic estimate yesterday holds when the final weekend count is released today, The Avengers would be the first movie ever to haul in US$200 million in a single weekend.

While the number could dip below US$200 million today, Disney spent the weekend revising its forecasts upward as business kept growing.

"There aren't even words, to be honest. I'm running low on double takes. Every time we looked at a number, it just got bigger than what we could have hoped for in the best-case assumption," said Dave Hollis, Disney's head of distribution. "With this film, this weekend, anything is possible."

The Avengers started with solid midnight crowds Friday, though nowhere near a record. Then it did US$80.5 million for the full day Friday, second only to the Harry Potter finale's US$91.1-million first day.

Revenues held up much better than expected with US$69.7 million Saturday, and Disney estimated that the film would bring in US$50.1 million more yesterday.

The record weekend was the culmination of years of careful planning by Marvel Studios, which has included teasers for an Avengers dream team collaboration in its solo superhero adventures.

Hollywood launched a potentially record-shattering summer with a vengeance, The Avengers landing as just the first of three huge superhero tales that highlight a line-up filled with other blockbusters in the making.

The Amazing Spider-Man follows on July 3 and The Dark Knight Rises wraps up the current Batman series on July 20.

As admission prices rise, Hollywood's record-breakers often take in more money but sell fewer tickets than previous blockbusters. But The Avengers took in so much money that it's the undisputed champ among debuts.

Based on average admission prices the years they were released, The Dark Knight and Spider-Man 3 had led with about 22 million tickets sold each over opening weekend. Today's average prices put The Avengers tally at around 25.6 million tickets sold.

Estimated ticket sales for Friday through Sunday at US and Canadian cinemas, according to Hollywood.com.