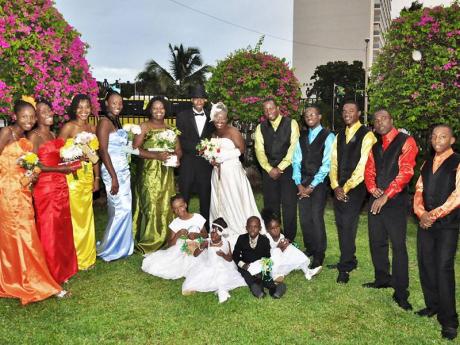 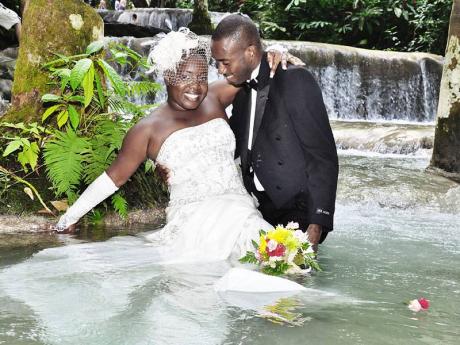 The one-of-a-kind couple creating memories that will last forever.
1
2

The friendship between graphic artist Kerrian Bryan, and Rohan Stephenson, an expert in the field of printing, started out of their shared interest in designing and gaming technology.

Both lived in Kingston, and their creative minds grew, became intertwined and gave birth to ideas of limitless, boundless, exotic designs. Once free to explore the possibilities, they discovered that the bond between best friends, had been nurtured and bloomed into a love to last a lifetime.

Always the gentleman, Stephenson sought the approval of Bryan's parents, having already earned their trust and respect. They consented, and in a throwback to old-school dating habits, Rohan texted Kerrian this message: "I think you owe me a date from 1981; let's meet at Devon house later after work for I Scream."

A moment they will remember forever, at the historic Devon House, Rohan carefully hid a 10-carat baby-blue amethyst ring in the signature Devon House Dragon Stout. She gladly accepted his proposal on June 22, 2011.

Simone 'Camaley' Hamilton, first runner-up in 2010 Digicel's Rising stars competition sang The colours of my love during the ceremony, as the couple exchanged their vows in what could be called their modern-day fairy-tale dream wedding on February 16, 2012.

Infused with five jewel tones; blue amethyst, yellow topaz, ruby red, orange citrine and emerald green, their 16-member bridal party truly portrayed the couple's love. Held at Hotel Four Seasons in Kingston, the ceremony area and the reception halls were lit and decorated in the colours of the bridal party. Dressed in an 'old English gentleman' tailcoat jacket from Fine Tuxedo in the United States, Rohan made a bold statement and commanded the room with his top hat and cane. His radiant bride was stunning in a strapless gown covered with gems and fine stones from Island Elegance in the United Kingdom. The couple's dream wedding was managed by Life's Unique Arrangements and Wedding Centre. Their carriage? A 2011 chrome Chrysler limousine provided by Luxury Limos.

The artistic couple caught the sunset outside Emancipation Park where they shared memories with family and friends. Afterwards they decided to cool things down and took a road trip to Dunn's River, where they completed their wedding photo shoot.

Guests returned home with a personalised copy of I love you 365 ways, a book of 365 love quotes co-authored by the couple.