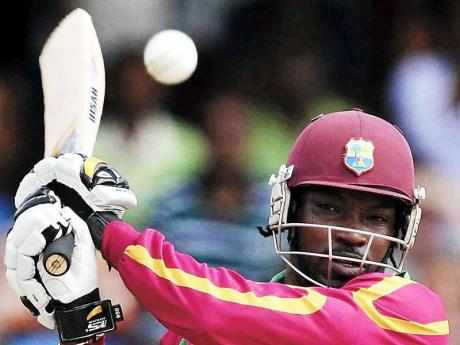 So Chris Gayle has broken a lucrative contract to rejoin the West Indies cricket team. I wonder if the West Indies Cicket Board will cough up the same amount his real big money people will be suing him for? I think they should. And I wonder whether Gayle will be giving us his all or is he just going to come in with an attitude that says, "you wanted me, here I am, tek what oono get!"

I am personally not looking for anything spectacular. I hope he surprises me.

The flurry over the greenless flag seems to have lived out the traditional Jamaican 'nine-day wonder', but many Jamaicans still do not know how to behave during the singing of the national anthem. I was at a function recently when the anthem was being sung and in the row across from me were two young women busy on their cellphones. I was as amazed as I was angry.

In fact, no matter how many times I see this blatant disregard for the anthem I am perplexed, and it's usually one of the few times I feel like hitting someone. That's because I grew up in the 'dark ages' when children were taught for hours every week in primary school how to behave during the singing of the anthem. So effective was the teaching that I would, over the years, stop what I was doing, wherever I was, and stand at attention even if I heard the anthem being played on the radio!

Hand in hand with the lessons about proper behaviour on special occasions, were long hours of repeating the national pledge for schools who the national heroes were, what the national symbols were and what they represented, the colours of the flag and what they meant and why certain dates were important in our history.

So, with all these memories flooding back, I stared at the two women until they felt my eyes, then upon eye contact, I displayed a very scathing facial expression that spoke volumes, meaning, "put the damn phones away!" They got the message, grinning sheepishly and dropping hands to their sides. I concluded my non-verbal communication with a look of disgust and shook my head. All this time my hands were firmly by my sides and I was as still as a lodge brother who has been told to be 'upstanding'.

As we prepare to shed the obvious vestiges of colonialism and take a president instead of a queen, as we get ready to swap the throne speech for the people's speech, let us not forget: If we are celebrating 50 years of Independence and we cannot even begin to comprehend the reason for basic respect of our flag and anthem, WE NUH READY!