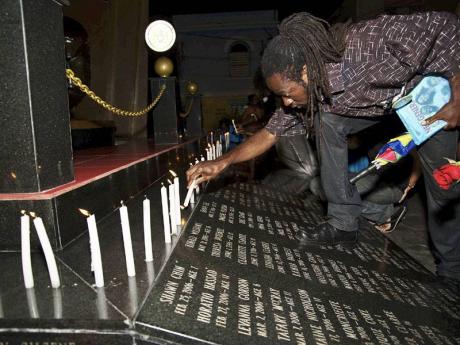 A picture of despair was etched on the faces of many who gathered at the intersection of Church and Tower streets in downtown Kingston yesterday evening to light candles and honour the memory of children who died violently or otherwise tragically over the years.

It was a familiar event for many who have been making the journey to the crying monument every year to light candles and reflect, but the emotion is one that many have just not got used to.

"Come mek me show you Crissy name," Doreen Raymond, a resident of Torrington Park in Kingston, told her nine-year-old nephew as the two drew close to the monument.

The nine-year-old boy and Crissy were friends growing up in the Torrington Park community until she was killed tragically when gunmen firebombed her house.

Her mother was also killed in the incident, which was considered an act of reprisal.

"She was a bright student at Clan Carthy Primary at the time. Her grandmother wanted to come but she said it was too much for her, so I am here as a friend of the family," Raymond said.

"It is sad because she could have become something good in life."