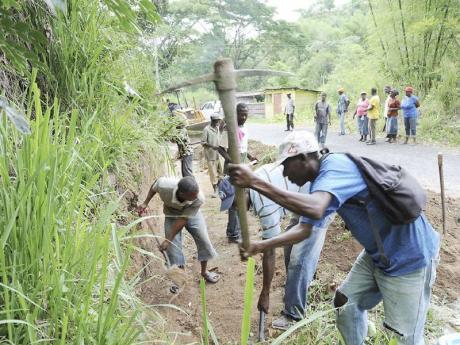 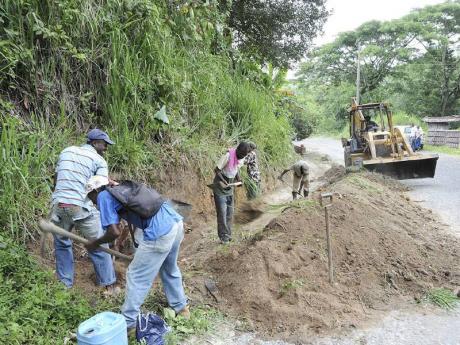 IT was just after midday when the Gleaner news team made its way past Hawkers' Hall on the way to Glengoffe in the St Catherine hills.

JEEP was in full throttle at a section of the constituency called Bamboo Corner. More than a dozen people were hard at work. Most noticeable, however, were three men, with machete in hand, who appeared to be catching their breaths; and two women who appeared to be playing an overseeing role.

There was also the case of a one-armed hand man at the site, with an umbrella in hand, and an orange cap with the marking PETER on it.

The cap was identical to those worn by supporters of Dr Peter Phillips, a senior member of the governing People's National Party.

The Gleaner was unable to ascertain whether the man was among the persons employed under JEEP.

Member of parliament (MP) for North Central St Catherine, Natalie Neita-Headley, told The Gleaner that she was not aware of the man either being from her constituency or being employed on the project.

"He is probably a passer-by," she said, while adding that workers were told that no party colours must be worn on the JEEP projects.

"It is very difficult to monitor. Unless you are on the site every day to monitor whether people wear an armband, cap or T-shirt," she said.

"When we can't find the funds to clean it, we have a problem," Neita-Headley said, while adding that flooding often results in the roadway rendered impassable.

Yvonne Sutherland, one of the JEEP passengers at Bamboo Corner, told The Gleaner that 23 people are working on that leg of the project doing drain cleaning and bushing. She said people are to get about three days' work.

"For a man to have nothing doing and he gets three days' work, him must eat food. You have people, from the start of the year, they don't collect a day's pay."

But one man who watched the cleaning team as it passed him told The Gleaner he was disappointed not to have been given a space on the JEEP.

"Is me first go up a school to vote and me nuh get nuh work," the barefooted man said.

In the meantime, Sutherland said political persuasion was not a factor which contributed to the selection of people for employment.