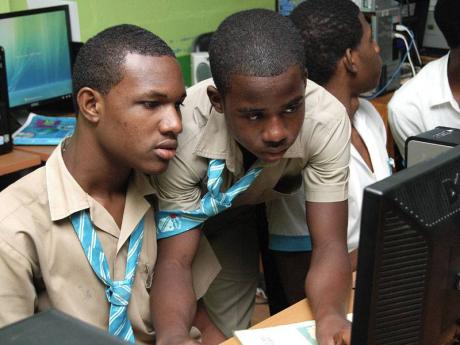 Students at the McGrath High School are engaged in a learning activity. The NEI said the school has many commendable features, underscoring that the quality of leadership and management at the institution are good. - contributed photos 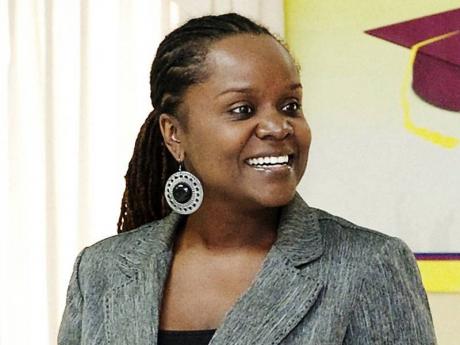 The National Education Inspectorate (NEI) has reported that leadership of a majority of schools under the comprehensive school improvement Centres of Excellence Initiative, are performing satisfactorily, noting that teachers are also generally meeting standards to support learning.

In its recently published reports on inspections conducted in March 2011, the NEI noted that the leadership at five of the six rural-based educational institutions under the programme was satisfactory, while only one continued to experience challenges.

Dr Renee Rattray, programme manager at the MBSF, said the primary goal of the MBSF has been to assist with improving leadership and governance in the six schools under the programme. She said the foundation is proud of the progress made by the principals, vice-principals and middle leaders in all the schools.

"Since the beginning of the Centres of Excellence project, we have worked consistently with the schools to assist them to build leadership capacity at all levels. The project team has provided leadership training and coaching services to the school leaders," she said.

"Changing inefficient practices and school culture is indeed a task; however, the administrators and academic staff have made significant strides," Rattray said.

She noted that schools have begun to operate more strategically and have achieved more efficient systems of accountability, including the use of school management software, to better monitor and track the performance of staff members and students.

The NEI's reports on the performance of the schools under the Centres of Excellence project highlighted some significant strengths in leadership at the schools.

For instance, the report on the Godfrey Stewart High School noted that its principal, Theobold Fearon, was strong and had a clear vision for the school that has resulted in several positive outcomes for the institution.

According to the NEI, Fearon has been meticulous to ensure that the school community is aware of the school vision, which has led to the school's transformation.

The NEI said as a result, the school is no longer stigmatised by the community.

"The principal holds staff accountable for their performance and administers discipline when necessary," the inspectorate says.

The NEI also acknowledged the strength of leadership demonstrated at the St James-based Green Pond High School noting that the principal, Michael Ellis, had a visible and supportive presence in the school.

"He is supportive of the staff and students and has implemented programmes to support teaching and learning. Targets are set and the vision shared with all stakeholders," the NEI reported.

The inspectorate also noted that McGrath High School had many commendable features, underscoring that the quality of leadership and management at the institution are good, while it acknowledged the leadership at the Mile Gully High School in Manchester as "increasingly effective," and applauded Porus High School, calling its leadership "firm and decisive".

However, the NEI noted that leadership at the Seaforth High School was not strong enough to inspire, motivate and influence staff and students.

But the inspectorate said governance by the school board was satisfactory and that the board, which was recently implemented, is putting systems in place to improve overall performance.

"Naturally, some schools are more advanced than others, in terms of implementing all that is required; but, we anticipate that all our schools will have stronger and more effective leadership systems that will help them to be more productive by the time the programme ends next year," Rattray said.

"The leadership of the schools and students are becoming attuned to higher expectations, and this has led to more efficient management styles and performance expectations," Rattray said, pointing out that overall, school culture in all project schools had been strengthened and that staff's expectations of students have increased greatly.

JNBS and VMBS provided some $100 million to fund the Centres of Excellence programme. The programme works closely with a team of experts and the Ministry of Education's Transformation Initiative to empower administrators, educators and students; and lift the performance capacity at all levels of the school population.