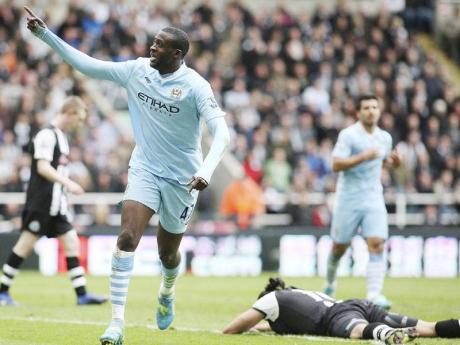 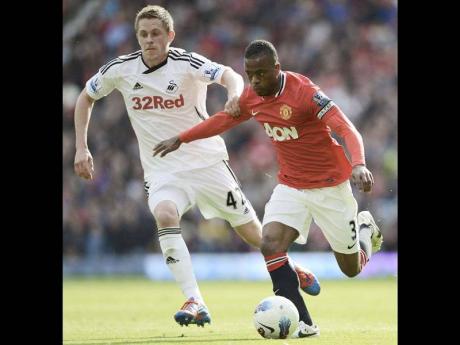 Manchester City put themselves on course to win their first English championship since 1968 by beating host Newcastle 2-0 yesterday behind two goals by Yaya Toure.

Manchester United defeated Swansea 2-0 on first-half goals by Paul Scholes and Ashley Young. The win pulled the defending champions even on points with Manchester City, but with a significantly inferior goal difference.

City almost certainly will win the Premier League if they defeat struggling Queens Park Rangers (QPR) in their final match next weekend. United are at Sunderland next Sunday.

"It's not finished," Toure said. "We have one game left and we have to be careful as QPR are fighting to stay in the Premier League. We have to continue to work hard and believe. This is brilliant for us, though."

Toure exchanged passes with Sergio Aguero on the edge of the penalty area in the 70th minute before curling a right-footed shot past diving goalkeeper Tim Krul.

The Ivory Coast midfielder scored again with a minute left as City exploited space left by Newcastle as they tried to even the score.

Djibril Cisse scored in the 89th minute to give QPR a 1-0 win over Stoke and move his team two points clear of the relegation zone.

Bolton missed the chance to climb out of the bottom three when they squandered a 2-0 lead and drew 2-2 with West Bromwich Albion. Relegated Wolverhampton Wanderers drew 0-0 with Everton.

Didier Drogba was the match winner once more as they overcame Liverpool to lift the trophy at Wembley. Drogba's goal early in the second half - his fourth in this Wembley showpiece - proved decisive. Ramires scored after 11 minutes and Chelsea looked in cruise control when Drogba continued his love affair with the FA Cup final and Wembley with an angled finish. Andy Carroll gave Liverpool hope then thought he had equalised as Kenny Dalglish's side laid siege to Chelsea's goal in the closing stages. But the referee and linseman deemed that the ball did not cross the line and Chelsea survived.

Steve Morison's late equaliser earned Norwich a draw that left a major dent in Arsenal's Champions League hopes. Yossi Benayoun curled in a shot with barely a minute gone, but Wojciech Szczesny somehow allowed Wes Hoolahan's tame effort to beat him. Grant Holt's deflected shot put Norwich ahead, but Robin van Persie levelled with a volley and completed the comeback with a well-hit second. But Morison's cross-shot pulled the Canaries level in a thrilling finish.

Tottenham squandered the chance to reclaim third spot as Aston Villa all but secured their Premier League safety with a vital point. Ciaran Clark put Villa ahead with a 25-yard shot that deflected off William Gallas and flew into the top corner. Gareth Bale was denied by an alert Shay Given save, but Spurs lost Danny Rose, who was sent off for a dangerously high sliding challenge on Alan Hutton. Emmanuel Adebayor levelled from the spot when Richard Dunne fouled Sandro.

James Morrison came off the bench to score a last-minute equaliser as West Brom put a severe dent in Bolton's chances of avoiding relegation. Morrison arrived at the far post to volley in Simon Cox's cross as the visitors fought back from 2-0 down. Martin Petrov had put Bolton in front from the penalty spot. A Billy Jones own goal doubled Wanderers' lead, but they were stunned as Chris Brunt lashed home before Morrison completed West Brom's rally.

Clint Dempsey scored his 23rd goal of the season to help Fulham to a deserved victory over Sunderland. Dempsey, 29, added to his growing reputation by curling in a 25-yard free-kick to put the home side ahead. Sunderland equalised when Phil Bardsley arrowed in a fierce shot only for Moussa Dembele's deflected strike to restore Fulham's lead within a minute.

Paul Scholes and Ashley Young were on target as Manchester United comfortably beat Swansea to keep their title hopes alive going into the final day. Scholes stabbed in from close range just before the half-hour mark and Young curled home from 18 yards. United, keen to reduce their goal difference deficit on City, failed to add to their lead after the break. Despite moving level on points with Manchester City, they are still eight goals behind Roberto Mancini's men.

Wolves avoided equalling a Premier League record of 10 straight home defeats with a scrappy draw. Everton controlled the opening period, with Nikica Jelavic having an effort controversially ruled out for offside and Steven Pienaar also threatening. The hosts improved after the interval, but Everton still looked more dangerous with Jelavic dragging wide with their best opportunity. But relegated Wolves earned a first home point since December 4.