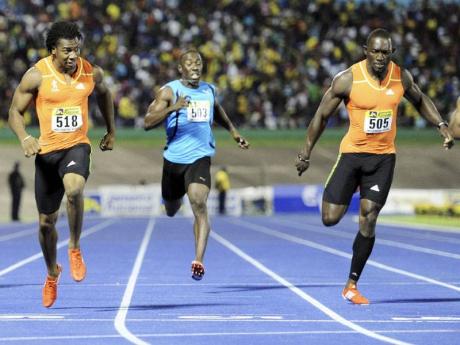 Yohan Blake (left) wins the men's 200m ahead of Nickel Ashmeade (right) at the JN Jamaica International Invitational track meet at the National Stadium last Saturday. Also captured in the photo is Marvin Anderson who finished fourth behind Warren Weir (not in photo), who was third. - Ian Allen/Photographer

THE large number of fans who came out to witness the 2012 staging of the JN Jamaica International Invitational IAAF World Challenge Meet inside the National Stadium were not disappointed, as most of the leading world athletes put on a great show.

Jeter wiped out her meet record of 10.86 seconds with a new mark of 10.81 seconds to top the world list.

However, it was not easy for Jeter as she had to call on her great top-end speed to get the better of Trinidad and Tobago's Kelly Ann Baptiste, who finished second in 10.86 seconds. Jamaica's Kerron Stewart was third in 10.98, the third fastest in the women's 100m so far this season.

Most of the fans came to see Bolt in action as the double-sprint record holder was competing in his first individual event this season. There were some anxious moments as the starter had to call back the athletes twice. No one was penalised at first, but on the second occasion, Trinidad and Tobago's Richard Thompson was charged for false starting, but he was allowed to run under protest.

Memories of last year's false start at the World Championships must have flashed back at Bolt, but he kept his composure when the race got under way the third time, winning the event in a world-leading 9.82 seconds, as his countryman Michael Frater ran well for second in 10.00 seconds flat, with another Jamaican, Lerone Clarke, third in 10.03.

"This is a good start for me as I was not able to compete this time last year. To come and give the crowd a nice run makes me happy. I am looking forward to the remainder of the season," Bolt said.

Despite what happened to him at last year's World Championship after false starting in the 100m final, the athlete says he was not rattled.

"No, I did not let that affect me as I learnt from that incident, which helped me to remain focused while this was going on around me," he said.

The race of the night was the women's 400 metres, which had a crack line-up with the Jamaica-born Sanya Richards-Ross, who now competes for the United States, Williams-Mills, Rosemarie Whyte and former World and Olympic champion, Christine Ohuruogu of Great Britain.

Richards-Ross came into the meet as world leader with 50.11 seconds.

However, Williams-Mills, who has pretty much 'owned' this event at this meet, ran a peach of a race. Richards-Ross went out very fast, forcing Whyte to change her game plan by going after her on the backstretch and using up a lot of energy. Running a very tactical race, Williams-Mills did not get carried away as she kept within pace of Richards-Ross and when the athletes touched the 100 metres straightaway, she joined Richards-Ross in a very keen battle before the Jamaican pulled away for a convincing win in a World-leading 49.99 seconds, with Richards-Ross clocking 50.11 for second and Ohuruogu, running her best race for several years, finishing third in 50.93 seconds.

It was a welcome return to competition at the highest level for sprint hurdler Brigitte Foster-Hylton, who gave a blistering performance in the women's 100-metre hurdles, where she toppled a classy field.

Having not competed for over a year due to injury, the Berlin 100-metre hurdles champion rolled back the years with a vintage performance, as she sped away to a fast 12.51-second win to post the second fastest time by an athlete over the barriers this season.

Only Daegu World champion, Sally Pearson of Australia, with 12.49 seconds in Melbourne, Australia, in early March, has gone faster.

"I was very confident that I was going to run a fast time as my coach told me that I was on target to run 12.4 or 12.5 and I have confidence in him. I believe in him a lot," Foster-Hylton said.

"Seeing that it was my first hurdle race in a long time, I was extremely nervous at the warm-up track. That was the first I was feeling like that since my rookie year at the 2000 Olympic Games."

Blake joined the party in the final individual senior race of the night, the men's 200 metres, where he faced up against his former teammate at St Jago High, Nickel Ashmeade, who posted a record run of 19.98 seconds at the meet last year.

Despite a gallant run from Ashmeade, he was no match for Blake, who went out very fast to sprint away for a World-leading and meet record time of 19.91 seconds. Ashmeade finished second in 20.09 seconds, while the ever improving Warren Weir ran brilliantly for third in 20.09.

"It is a wonderful feeling to know that I was able to run so fast and to a World-leading time in my first 200 metre of the year. I am a bit surprised that I ran sub-20 seconds in my first 200-metre race of the season, because normally I run a low 20."

Another ever-improving athlete, Hansle Parchment of the University of the West Indies, was also among the records as the World University Games champion defeated a strong field to clock a personal best of 13.19 seconds to win the 110-metre hurdles and erase the old mark of 13.27 seconds done by Antwon Hicks in 2009. Hicks was third in the event on Saturday in 13.36 seconds as Ronnie Ash, also from the United States, was second in 13.20.

Olympic 100-metre champion, Shelly-Ann Fraser-Pryce, failed to defend her title in the women's 200 metres. She led for the majority of the race before she was caught inches from the finish line by the United States' Bianca Knight, who won in 22.49 seconds. Fraser-Pryce (22.53) settled for the runner-up spot, with the US' Shalonda Soloman third in 22.82 seconds.

The Bahamas high jumper Donald Thomas recorded the only meet record in the field, as the 2007 World champion soared to 2.27 metres to erase the old mark of 2.20 metres. Jamie Neito, who placed second, also cleared the old mark, with a 2.24m jump.