The spirit of Whitney invades MoBay 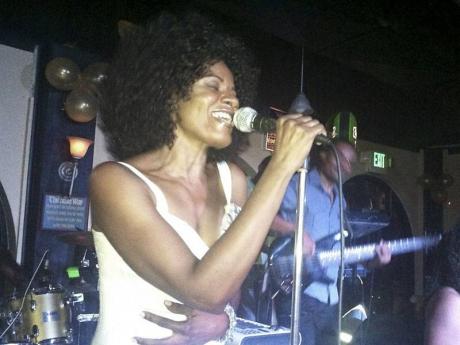 The Twisted Kilt, on the Montego Bay Hip Strip, was transformed into a musical shrine for the late Whitney Houston on Friday, thanks to a commanding performance by one of Jamaica's songbirds, Gem Myers.

The show, the first in an entertainment series dubbed 'Gimme de Bass', which will be staged monthly at the Twisted Kilt, drew a variety of emotions from patrons who sang, clapped, danced, laughed and cried as Myers took them through a memorable journey of Houston's amazing catalogue.

With master bass player Taddy P and The Blow Wow Band offering superb instrumental support, the dapper Myers, regally clad in a flowing white outfit, which evoked memories of a trim and trendy Houston, took the stage at 10:10 p.m., and it was all magic for almost two hours.

Opening with the soothing I'm Every Woman, Myers' vocal prowess immediately soared to the fore as she struck super sweet notes, which the audience responded to like a well-schooled choir.

It was all ecstasy as songs such as I Have Nothing reverberated around the venue. She then all but brought the house down, belting out a compelling rendition of, Judgement Day, which drew deafening screams.

The sweet musical journey continued medley style with Myers reeling off songs such as, Where Do Broken Hearts Go, Didn't We Almost Have It All, You're Still My Man and All At Once, without missing a beat, much to the delight of the fans.

Deep emotions took over in the next block of songs as a few patrons were moved to tears while Myers masterfully re-created Houston's vocal pitch on songs such as, All at Once, I Go To The Rock, Greatest Love and One Moment In Time, which she dedicated to the Jamaican track team, which will be heading off to the 2012 Olympics in London.

After the rousing reception she got for, One Moment In Time, Myers ended her first set on a high, belting out two awesome renditions of You Give Good Love and I Wanna Dance With Somebody.

Back in full black

Following a 25-minute break, Myers returned clad in full black for set two. However, it was only her attire that had changed as she picked up from where she left off, again without skipping a beat.

Myers quickly recaptured the energy and attention of the patrons as songs such as, Am Your Baby Tonight and Saving All My Love, grabbed their full attention, especially when Taddy P got his bass guitar to talk along with her.

With some patrons taking to the dance floor and dancing away with their partners, Myers went into overdrive. Songs such as, All The Man I Need, When You Believe and So Emotional, which really moved and grooved all and sundry

The tempo continued to climb towards cloud nine as Myers unleashed another awesome medley, featuring songs such as, Why Does It Hurt So Bad, For The Love Of You, How Will I Know and I Believe In You And Me.

After vacating the stage in an apparent attempt to close her set, Myers was promptly called back for an encore. She returned and temporarily departed from Houston's catalogue. She sparkled with some of her own material, dazzling with songs like, One Man Girl, Say What, Bagawire and How Will I Know.

When she returned to the Houston collection, she did so with much passion. She was in tears as she sang the Houston classic, I'll Always Love You, and had some members of the audience shedding tears right along with her.

She closed her performance most fittingly, delivering a compelling rendition of the heartfelt classic, I Look To You.