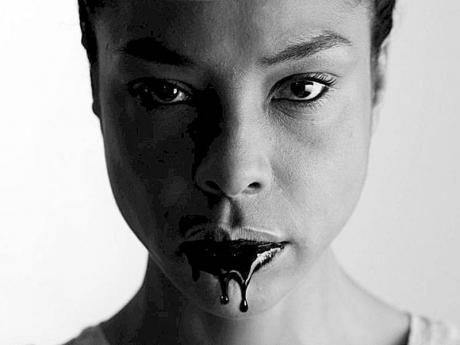 Sophie Okonedo, from a scene in the movie Livelihoods.

OSCAR-NOMINATED actress Sophie Okonedo has joined other professionals in a new short film that aims to highlight the plight of millions affected by oil spills in the Niger Delta, Nigeria.

The British-Nigerian actress, known for films such as Mrs. Mandela, The Secret Life of Bees and Hotel Rwanda, was among professionals who appeared in the two-minute film, called Livelihoods.

In one shocking moment, Okonedo appears to have oil or blood dripping from her lips.

Film creators human rights organisation Amnesty International said Livelihoods throws a spotlight on the devastating impact of oil pollution across the oil-rich Niger Delta region and how it has ruined the livelihoods of millions of local people.

Amnesty released the film on April 24, and also called on oil giant Shell to take responsibility for the fallout from several oil spills in the region.

It was at the start of a week of protests by thousands of people in the United Kingdom (UK) and around the world. They are calling for Royal Dutch Shell to finance a US$1 billion fund to begin the clean up in the region.

Amnesty also called on the UK public to sign its global petition calling for Shell to take action. "We are aiming for 10,000 signatures from the UK," Amnesty said.

Amnesty International UK's Director Kate Allen said: "What we're seeing unfolding across the Niger Delta is nothing short of a human rights catastrophe, and this has inspired Sophie Okonedo and several others to join Amnesty's campaign calling on Shell to clean up and pay up."

Allen continued: "The Niger Delta was once a beautiful wetland teeming with fish. And it supported a population of nearly 40 million people, but over the last 50 years, an estimated nine to 13 million barrels of oil have been spilt in the Niger Delta ..."

"It's left a devastating legacy that has destroyed the livelihoods of nearly everyone living there. The fish they catch, the water they drink and the air they breathe are all severely contaminated by oil pollution."

The group blamed Shell for causing these problems. "It is time they cleaned up their mess and adequately compensated the people of the Niger Delta," Amnesty said.

Shell said in a statement to Nigerian newspaper THISDAY that it had previously admitted liability for two spills of about 4,000 barrels in one Niger Delta community, Bodo, caused by operational failures, as soon as their cause was verified in late 2008 and early 2009.

Shell not only to blame

The company said a joint team of operators, communities, security agencies and regulators had investigated the spills in Bodo, ascertained the spill volume, and signed off on the joint investigation report.

"It is deeply regrettable that, both before and since those two operational spills occurred, much more oil has been spilt as a result of illegal activity - sabotage, illegal refining and theft - which blights the Delta generally," Shell's statement said.

"Our clean-up teams were able to deal with the initial operational spills, but subsequently they have been prevented by local communities from reaching sites that were reimpacted by this illegal activity to begin clean-up and remediation work. This could be because those communities hold a misguided belief that more spilt oil, irrespective of the cause, equals more compensation," the statement said.

Shell said it has provided relief to Bodo, but any process to discuss issues around the spill and decide compensation has been 'slowed' by conflict between two local Bodo-based bodies, and also while it tries to identify which of several lawyers - all claiming to be acting on the Bodo community's behalf - Shell should work with.

This is not the first time the oil giant has faced criticism or court action regarding the Niger Delta. In 2009, Shell paid out US$15.5 million (£9.9 million) to the Niger Delta's Ogoni people who sued the company. It denied the payment was an admission of guilt.