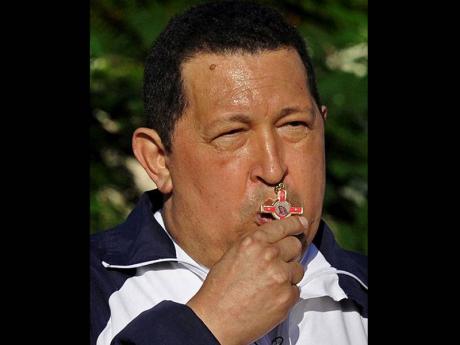 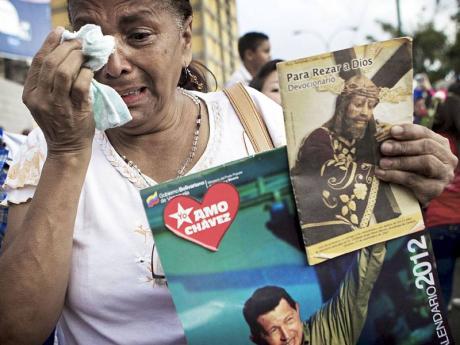 In this February 24, 2012 file photo, a supporter of Venezuela's President Hugo Chávez cries as she holds a picture of him, as well as a poster of Jesus, during his caravan to the airport to travel to Cuba for surgery to remove a tumour, in Caracas, Venezuela. The poster reads in Spanish
1
2

Venezuelan President Hugo Chávez has spent much of his career praising the socialist ideas of famed atheists such as Karl Marx and Fidel Castro. Now in the thick of a prolonged battle against cancer, however, the leftist leader is drawing inspiration from a spiritual leader: Jesus Christ.

Chávez has been praying for divine intervention during increasingly infrequent appearances on television, holding up a crucifix while vowing to overcome his illness. He says living with cancer has made him "more Christian," talk that has spurred speculation that cancer might cut short his bid for re-election in October.

Chávez's voice cracked with emotion as he bade farewell to aides and supporters in Caracas on April 30 before leaving for what he said would be his final round of cancer treatment in Cuba.

"I'm sure our Christ will do it again, continuing making the miracle," Chávez said as he raised his cross to his lips and kissed it, prompting applause from an audience of aides.

"Given that he cannot hide the illness, but he can hide its characteristics and danger, he's decided to take as much advantage of it as he can, and one advantage is the symbolic and religious issue," said Luis Vicente Leon, a Venezuelan pollster and analyst. "He'll present himself as the chosen one, the man who has been cured and healed by the Lord to continue governing the country."