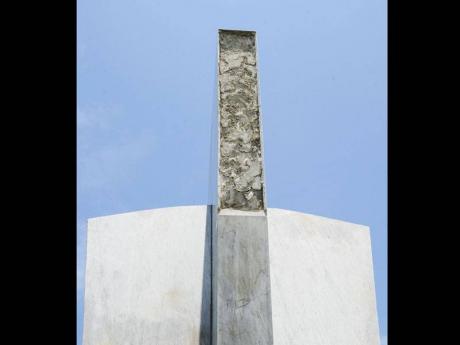 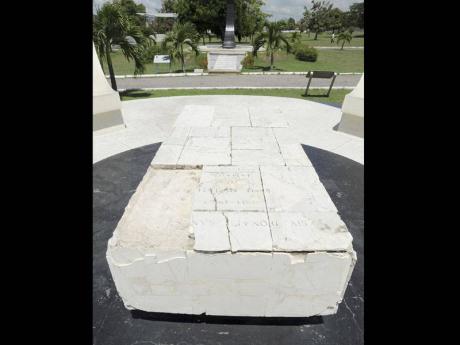 The monument in memory of late Prime Minister Donald Sangster at the National Heroes Park in Kingston appears to have been vandalised. - photos by Ricardo Makyn/Staff Photographer 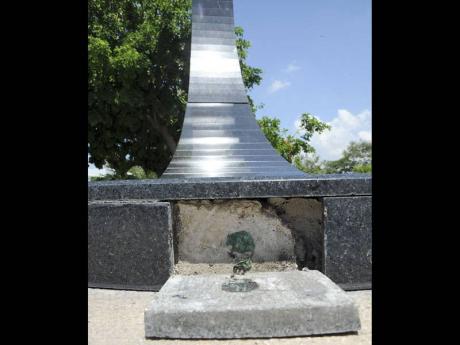 THE CENTREPIECE of Jamaica's heritage - the National Heroes Park - has been selected as the National Labour Day project for 2012, the year Jamaicans observe the country's golden jubilee celebrations of Independence.

With focus shifted to the park Jamaicans visit to pay homage to the country's freedom fighters, former leaders and cultural icons, at least three of the shrines housing the remains of former prime ministers - Michael Manley, Hugh Shearer and Donald Sangster - are in need of rehabilitation.

The Gleaner visited the park yesterday, after Prime Minister Portia Simpson Miller officially launched Workers' Week and Labour Day 2012 at Jamaica House, and found some of the monuments in need of repair.

Executive director of the Jamaica National Heritage Trust, Laleta Davis-Mattis, told The Gleaner yesterday that her agency, which has responsibility for maintaining the shrines, had been putting together a budget to carry out repairs on the monuments.

"We have prepared an estimate with a view to seeking some funding to have them all fixed. So we are hoping that after discussion with the minister, it should now become a part of the whole Labour Day activities," she explained.

She pointed out that the damage to Donald Sangster's shrine appeared to be the work of vandals.

The theme of Workers' Week and Labour Day this year is 'Step Forward - Make Jamaica Beautiful'.

Simpson Miller said the theme was a call to action for Jamaicans to unite and step forward boldly to "make this the best Labour Day ever in celebration of our 50th anniversary".

"The theme places emphasis on cleaning up (and) beautifying our environment. It will not be possible to honour our heritage without honouring ourselves and cleaning up our country," Simpson Miller told scores of officials who attended the launch.

Commenting on the park, the prime minister said Jamaicans should put work into beautifying National Heroes Park, "a special place in memory of our national heroes and those who served selflessly this country and our people".

Minister of Youth and Culture Lisa Hanna said many of the public spaces that would host Jamaica 50 celebrations would be cleaned up as part of Labour Day activities.

A national church service will be held on Sunday, May 20 at the Calvary Baptist Church in Montego Bay in recognition of the historic role played by Baptist churches in the fight against forced labour and the martyrdom of Deacon Samuel Sharpe.