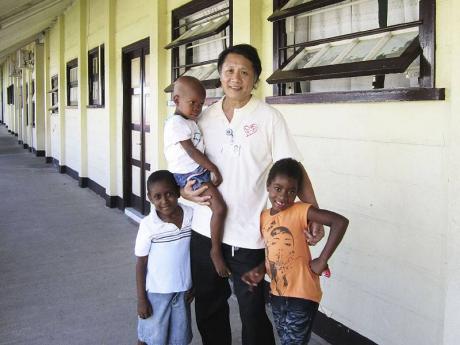 Philip Liu, founder and chairman of Angels of Love, poses with children assisted by the non-profit organisation, Kevin Grant (left), who has since died, Dejanea Lewis (right) and Abbigay Brown. - Taken from Facebook

"Our relationship with the children is like a marriage. Once we take them on, we are committed."

That's how Philip Liu describes the bond between Angels of Love and critically ill children across Jamaica.

Liu is the founder of Angels of Love, a non-profit organisation that was established in October 2009. It is dedicated to providing lifesaving treatment, health, education and support services to children with physical, mental or emotional troubles.

"We assist critically ill, disadvantaged and underprivileged children across the island. It brings me joy if I can make at least one person smile a day," said Liu.

Over the years, the organisation has worked with the Bustamante Hospital for Children in Kingston by adopting Ward 7, rebuilding a garden and donating items such as a suction machine, a refrigerator and a triple-tub cooling bath.

Most of the children suffer from cancer and other illnesses. The organisation assists them financially in various ways, such as facilitating tests, scans and prescription drugs.

"Bustamante is the only hospital for children in Jamaica, and transportation costs are just one of the many hurdles encountered. Medication can also be expensive, some costing $20,000 and only lasting three weeks," Liu said. "We even paid airfare for a lifesaving treatment that could not be done in Jamaica."

The foundation raises funds through events such as bazaars and raffles. There are also heart-shaped donation containers placed at locations such as Little Tokyo, Brick Oven and Café Bleu.

Activities are not all centred around finances, however, as members of the organisation interact with children admitted to the hospital.

"We have volunteer work the third Saturday in each month. We go through the wards at the Bustamante hospital to read, talk and play games with them, among other activities," Liu said.

He is also planning a project called 'Wish for Children', aimed at reaching children who are critically ill from birth, spending most of their lives moving from their communities to the hospital.

"They never had the opportunity to visit various places or meet public figures they emulate such as Usain Bolt and Yendi Phillipps. I would like to grant some of their wishes before they die," Liu said.